I am a careless young man. In my last post, I left out four wind farms in Victoria: Codrington, Toora, Wonthaggi and Hepburn. I have now included them, in the below screenshot:

Of particular note is the revelation that all of Melbourne is now encompassed by the documented effective range of Wind Turbine Syndrome, and is subject to these effects from two separate wind farms: 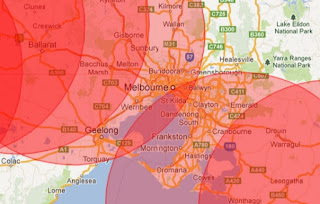 Considering this, let's take a closer look at the different cities covered by this range, and their respective populations:

Using self-reported anecdotes as primary evidence isn't great - you end up with fairly absurd figures, as above. This serves as a brilliant example of how extremely improbable claims are happily put forward as supporting evidence by anti-wind groups.

These are then sold as firm evidence of a catastrophic and concerning health issue.

As the author of the claim points out,

"Truly these figures appear subjective, outrageous, and for most, impossible to believe. However, I am reporting my findings that have taken hours and days to determine. I’m not just plucking figures out of the air."

Below is the interactive map - first gadget is for all browsers, and the second will work if you have Google Earth installed on your computer.