Cobb vs The Laws of Physics

Michael Cobb, a writer for The Blayney Chronicle, wrote a curious piece on wind energy on the first of November this year. Was it this Michael Cobb, ex-Nationals MP, married to Trish Worth, and involved in a dispute over a property named 'Twaddles'? Possibly. The Central Tablelands and Hereford's Association lists 'Michael Cobb & Trish Worth' exhibiting a stud named 'Waratah', right next to Blayney, so it seems likely.

Cobb's article is strangely reminiscent of previous visits, by journalists, to the town of Waterloo. Overwrought  and weirdly credulous, the article makes no effort to examine or investigate the claims of residents. Let's investigate a few of Cobb's claims.

"The Waterloo Wind Farm, which I chose to visit, is the closest of these to Adelaide, being about 125 kilometres north of that city. It has been very controversial and constantly in the news since it began operating two years ago."
Using Google News Search, you can get an idea of the number of articles that contain certain keywords. In this case, you can search for the phrase 'Waterloo Wind Farm'. Since the opening of the wind farm in February 2011, there were 10 articles published containing the phrase 'Waterloo Wind Farm', each on a separate day. That's 10 days, out of a total of 639 days between 01/02/2011 and 01/11/2012. "Constantly in the news" = about 2% total time. A very liberal definition. Represented graphically:

"Regrettably I could not speak to any hosts of the wind towers because of confidentiality clauses that the wind companies now require the hosts to sign."
Like the one that stopped this wind turbine host from talking to The Australian, Alan Jones, the Mount Gambier Border Watch and ABC Radio National Breakfast.

"Standing at the base of such gargantuan towers looking heavenward at these fully imported monsters - "
Hm. I honestly think of any local manufacturers that make wind turbine towers. (To add insult to injury, Whyalla is the town that Tony Abbott claimed would be 'wiped off the map' due to the impacts of the carbon tax).
"- where you could land a helicopter on the hub, seemed to symbolise the ultimate folly of man."
You need a 15m diameter circle to land a helicopter. Waterloo wind farm is comprised of Vestas V90 wind turbines, which have a hub that is 4.4m long, and 4.2m wide. Oh dear. No helicopters, Michael. No helicopters.

"The large amplitude waves of infra sound often only 'take effect' at long distances from the tower. I learnt that sometimes it is better to live under the tower than some kilometres away."
When Michael says 'large amplitude' waves, he might mean 'long-wavelength'. The amplitude (sound pressure level) of infrasonic sound emissions from wind farms match that of a beach, as discovered by Sonus when comparing infrasonic emissions from wind farms to other locations.

Sound pressure attenuates over distance. The closer you are to the source, the greater the sound energy. Michael claims that infrasound only 'takes effect' at large distances. This subtle change to a particularly significant physical law of the universe goes unexplained.

"This farmer was eight kilometres away too in another direction, and also can't see the towers as he too has a range between him and the towers. "It was just like a jet the other night", he said."
Obviously, this farmer is referring to an audible perception of wind turbine noise. Eight kilometres away from a wind turbine is pretty far. Let's be generous and assume that we're 500 metres away from a wind turbine - the decibel level attributable to the machine is roughly 40 dB(A). The noise of an airplane is around 150 dB(A).

It's a rough calculation, but it demonstrates the new ground broken by Cobb in the ever-expanding realm of wind farm hyperbole.

"Suffice to say that as long as the government subsidies continue to flow to the operators and the green voters continue to be appeased in their city apartments, people like those at Waterloo will continue to be the unfortunate "road kill" of these projects I was told."
It's funny he mentions city apartments. In the aforementioned Sonus report, they include measurements taken in the Adelaide Central Business District. As it turns out, the level of exposure of residents there, to noise emissions in the infrasonic frequency range, is roughly equal to that of those living near a wind farm. 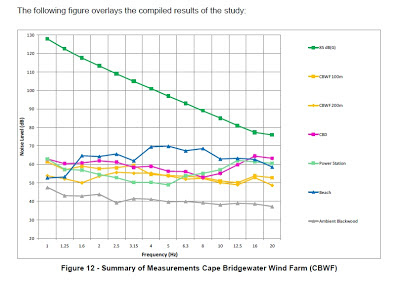 "Their faces had searched mine for some glimmer of hope. What more could I do?"
Fact checking.
Posted by Ketan at 15:23:00