The anonymous bloggers 'Stop These Things' have recently published a post, in which they list the followers of the fake Twitter account 'Waubra Sarah'. There are complexities around the issue of fake Twitter accounts. Some of the better ones I've seen are Cory-Bernardi-Not and, of course, the legendary Fake Fielding, and his musings on the danger of 'Wind Turbulines'. (See a neat list of them, here).

Oddly, they angrily denounce the '25 stooges', but on counting the unique accounts in the screenshots they provide, they add up to 28. Even more confusing is that neither me nor Infigen's Twitter account has ever followed 'Waubra Sarah'.

My first suspicion was that they had simply photo-shopped our images and names onto the screenshots, but it seems they aren't in possession of that level of technical prowess.

The ordering of their screenshots gave it away - they simply took a screenshot of the 'Following' page, rather than the 'Followers' page. Which is, literally, a lie.

Below is their screenshot, presumably from the browser window of their iPhone, of the proclaimed 'followers' of Waubra Sarah, that they confidently proffer as evidence:

Myself, @Infigen and @carlvphillips aren't actively following @WaubraSarah. Their browser only shows the first six line items - when you open the 'following' page in Chrome or another browser, you see that that last screenshot is misleadingly presented as a 'follower' listing, rather than a 'following' listing.

Note that the names, and the order, are the same as their screenshot. 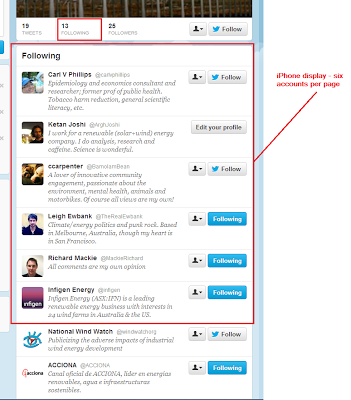 It goes without saying that to be followed, on Twitter, is not a suitable metric for determining associations. In addition to @waubrasarah, I am being followed by:

They're (presumably) not in secret cahoots with the wind industry. As I mentioned previously, this sort of non-complex deception is relatively easy to publish, as long as their anonymity is preserved. Here's a PDF of their page, in case they alter their post without acknowledging an edit (as they did last time).

Their profound loathing for social media, combined with an active hatred for wind energy and individuals in the wind industry, is likely what drives their propensity for barely-concealed falsehood. I suspect they feel somewhat buoyed by their anonymity - they liken themselves to the classical Real Life Superhero, masked vigilantes unwaveringly seeking justice for the wronged.

I feel a good place to start, in their quest for justice, would be a mild portion of honesty, and a discussion of ideas, rather than individuals.
Posted by Ketan at 01:43:00