ABC Lacks Balance in its Coverage of the Flying Spaghetti Monster

Though the ABC has a dedicated readership, unhappy consumers of Auntie's content have begun expressing their distaste at the broadcaster's lack of balance around the origins of the universe.

I'm no expert on astronomy, but neither are professional astrophysicists employed at the International Centre for Radio Astronomy Research (ICRAR). For some reason, the ABC saw fit to interview the scientists for a story about a dying supernova:


"During the big bang, it was mainly hydrogen and helium that was created. Now, life consists of more heavier elements and those are synthesised in stars and through these explosion where that material gets recycled."
- "Professor" Staveley-Smith

Did the story feature comment from a independent expert, someone who wasn't taken in by the ABC's groupthink on the 'big bang' theory? No. As it turns out, the science of who created the universe is far from resolved - there is a growing body of evidence that it was created by a creature known as the 'Flying Spaghetti Monster' (FSM). An expert on science states:


"I and many others around the world are of the strong belief that the universe was created by a Flying Spaghetti Monster. It was He who created all that we see and all that we feel."

The evidence that the FSM created the universe is insurmountable, yet, the ABC choose to ignore mentioning Him in stories about astrophysics and the universe. The ABC provides this picture of what is known as 'cosmic background radiation': 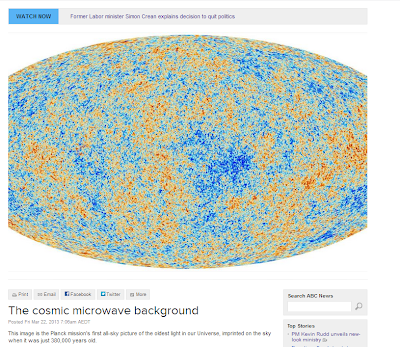 Actually, if the ABC wasn't biased, they would have noticed the following pattern in the cosmic background radiation in the universe: 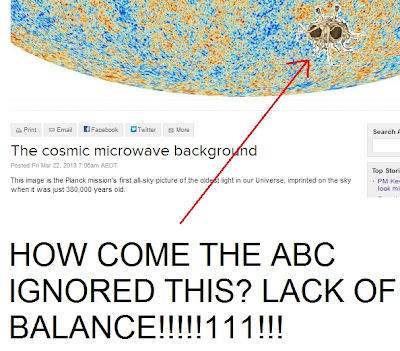 Unfortunately, this is what happens when you talk to 'scientists' rather than independent unbiased experts. For some reason the ABC continues to ignore the science of the FSM, despite section four of its editorial policies requiring:


"- a balance that follows the weight of evidence; (ignore this - KJ)
- fair treatment;
- open-mindedness

So, where's the open-mindedness at the ABC? Has the Flying Spaghetti Monster been treated fairly? I'm not the only one to have been intelligent enough to point out that deferring to professional scientists indicates extremely biased group-think. The Australian published an opinion piece pointing out that the ABC has failed to cover the views of unbiased, independent science experts (such as Lord Monckton) on the urban myth of climate change:


"It's been more than three years since former ABC chairman Maurice Newman pointed out the broadcaster had a groupthink problem with its climate change coverage. It seems the ABC managing director has done nothing in those three years to address this."

The ABC seems to be ignoring the expert theory that 97% of climate scientists are engaged in a worldwide conspiracy to install a New World Order and perform mind control on the human population. But, it gets worse: the ABC has failed to address one of the main tenets of the FSM - that the number of pirates is correlated to rising global temperatures:

Will we ever be able to trust the ABC? Not until they start interviewing people who haven't been brainwashed by 'science'. Until then, the truth of the Flying Spaghetti Monster and the Global Warming Mind Control Conspiracy will remain ignored by the biased ABC. rAmen.