The Waubra Foundation, Australia's key player in the spread of health fears around wind energy, have stepped up their efforts - a flashy new website has popped up, adorned with brazen statements in which they directly appeal to health professionals - an unambiguous effort to recruit GPs and doctors to the cause of anti-wind efforts: 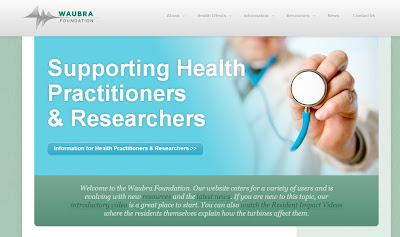 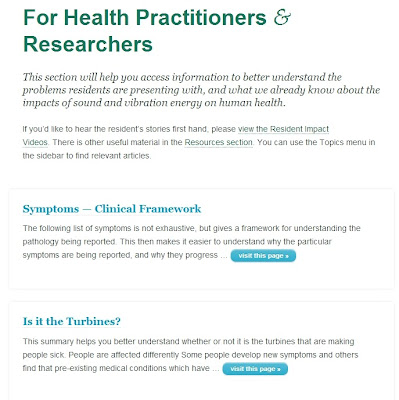 Digging into the page in which they claim to have proof of a direct causal relationship between wind turbines and health effects, the content devolves from neatly presented graphics to conspiratorial prolix:


"Rather, the wind industry and its acousticians are well aware of the symptoms and their cause, which was shown by Kelley et al to be directly related to infrasound and low frequency noise in laboratory experiments generating the noise and testing the effects on volunteers."

The theory that the wind industry has been conspiring to suppress Kelley's research on wind turbines since the late 80's seems to have taken off in recent weeks, despite the fact that the machine referred to in Kelley's research was a prototype, and that indoor noise testing from modern wind turbines (the largest machines in Australia) shows nearly no alteration to low-frequency and infrasonic noise levels before and after operation.

The 'Resident Impact Videos' are an attempt to circumvent diagnosis by registered health professionals. Through the collation of video testimony, the Foundation shifts the focus away from science and heaves it towards emotional impact, hoping viewers will assume a causal link between the very real health problems of residents, and the ominous presence of wind turbines.

The Waubra Foundation seem to have no qualms with circumventing the Victorian Department of Health, the NSW Department of Health, the South Australian Environmental Protection Agency and the National Health and Medical Research Council, by reaching out directly to health practitioners and asking them to partake in what I suspect is a deeply unethical practice - telling residents that their symptoms are caused by wind turbines, when there is no evidence that this is the case.

So, who's behind Waubra's brazen and polished efforts to circumvent public health and inject their own reality, of cover-ups and secret wind industry phone-tapping conspiracies, into contemporary medicine?

A quick domain check gives us the answer: 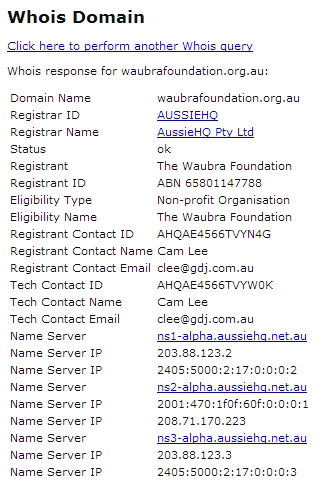 The website was registered by Cam Lee of Grant Day James - an ad agency based in Sydney and Melbourne.

No, you certainly can't. The old .com.au address is still registered to Susan Ghent from Lowell Resources - an investment firm with interests in 'mining and energy companies'. From the Waubra Foundation's new 'Information for Residents Page':


"In the case of wind turbines, in some locations residents have noticed batteries on phones, cars, tractors, and cameras discharging very quickly, flourescent light bulbs lighting up spontaneously and electricity meters spinning much more quickly despite homes being abandoned and little electricity being used."

"Residents have also noticed quite marked rapid fluctuations in air pressure when outside, especially within 1 – 2km of operating wind turbines, sufficient to knock them off their feet or bring some men to their knees when out working in their paddock, and have been reported by farmers to perceptibly rock stationary cars."

These claims seem to surpass implausibility, landing ceremoniously in the realm of sorcery. They highlight the risks of the Waubra Foundation hiring an ad agency to draw in a greater crowd. Though their graphical layout may be slightly easier on the eye, the content they publish is still a blurred, horrendous mish-mash of odd claims and extremely dangerous medical misinformation.

Recently, an anti-wind group on King Island hired a PR firm to add a sheen of professionalism to their objections. The Waubra Foundation's newly polished efforts to circumvent the system of public health and feed misinformation into modern medicine are truly unnerving.
Posted by Ketan at 11:40:00