The Minister for Climate Denial

Something caught my eye last night, whilst I splashed casually through the babbling brook of 140 character twitter snippets on my phone:


If Abbott looking for replacement for Sophie Mirabella, @DennisJensenMP tells ABC24 he can "pick me" because he's a scientist #ausvotes
— Phillip Hudson (@PhillipMHudson) September 11, 2013


At the time of writing, Sophie Mirabella is in danger of losing her seat in Indi, faced with a formidable campaign by independent Cathy McGowan. In 2009 Mirabella was appointed as the Shadow Minister for Innovation, Industry, Science and Research. Even if Mirabella wins her seat, she's unlikely to retain the Industry portfolio. Avowed climate skeptic Dennis Jensen, an MP with a PhD in ceramics, calmly raised his hand.

The concept of a science minister who rejects the science of climate change inspires the same nervous discomfort I'm sure many Americans felt when proponents of Intelligent Design began to gain a foothold in the American education system. In 2009, Jensen invoked Adolf Hitler when trying to support his view that anthropogenic global warming is utterly non-existent:

Jensen's propensity for equating himself with supremely intelligent scientists put him in obvious good stead with the Galileo Movement, a climate skeptic group even Andrew Bolt distances himself from, (due to his concerns around their professed fear of 'Jewish banking families', something the Galileo Movement strenuously denies):

Last year, Delingpole classified Australia's wind energy industry as a paedophile ring, and called for the 'metaphorical' execution of those that accept climate science. In addition to his seeming endorsement of Delingpole's robotic but vile rhetoric, his stance as a climate change skeptic acts as a beacon to incoherent conspiracy theorists: 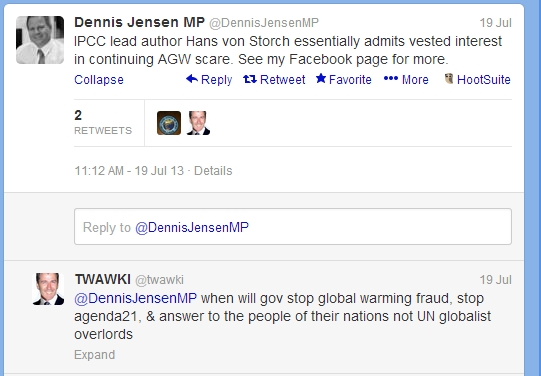 Worse than the buzzing cloud of grammatically-challenged hyper-sensitive conspiracy theorists is Jensen's own rejection of the existence of a scientific consensus among experts in the field: 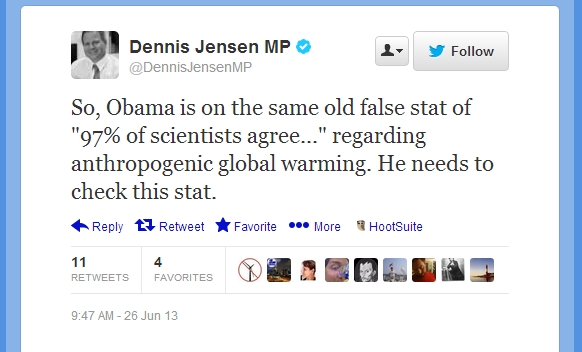 A team led by John Cook and Dana Nuticelli examined 11,644 abstracts, and found the following:


"Among self-rated papers expressing a position on AGW, 97.2% endorsed the consensus. For both abstract ratings and authors' self-ratings, the percentage of endorsements among papers expressing a position on AGW marginally increased over time. Our analysis indicates that the number of papers rejecting the consensus on AGW is a vanishingly small proportion of the published research."

The outright rejection of climate science is becoming less feasible every day. Maintaining that rejection in the face of mountains of evidence necessitates a weird treadmill of relentless conspiratorial narrative, and repetitive lines about a 'global warming pause' - easily debunked, but also easily spread when jettisoned in the passionate, emotional network of climate skeptics.

Instead of cherry-picking data or provoking stoushes on social media, the great pseudoscience communicators of our time simply work through analogy - Delingpole's execution metaphors, or the violent imagery of anonymous anti-wind blogs.

In Jensen's eyes, he's the modern day analogue of Albert Einstein, and every single scientist and scientific institution that supports climate science is equivalent to a genocidal dictator, suppressing the cold, hard truth of climate denial. Jensen explains the discrepancy between his own belief and hundreds of scientific institutions around the world through this analogy. Consequently, he can discard the possibility that climate scientists might know more about climate science than himself.

Draping violent analogy and repetitive myth over established scientific opinion is not an attitude one would want in the individual charged with steering the great ship of Australian science. No dictator has created a conspiracy to turn climate scientists against the deniers. In reality, their findings are the outcome of incomprehensible hours of hard work - huge quantities of time and effort devoted to efforts that likely won't result in glory - thanks to climate skeptics, publishing work as a climate scientist is now more likely to result in threats of physical harm.

Brian Schmidt, Laureate Fellow and Distinguished Professor at The Australian National University's Mount Stromlo Observatory and recipient of the 2011 Nobel Prize in Physics, sums up the issue succinctly.

It continues to be a tough year for those of us who like to discuss policy with science Ministers #indivotes
— Brian Schmidt (@cosmicpinot) September 11, 2013