Death Threats And The Finite Spiral of Anonymous Self Destruction

It's unsurprising, then, that efforts to scuttle renewable technologies do not manifest grandiosity, intellect or ethics. Seemingly, all you need a laptop, an internet connection, and a darkly zealous will to inflict harm.

Well-connected anti-wind activists are nothing new. Their primary purpose is to inject clouds of pollution into the discourse surrounding wind farms, and recently this effort has been spearheaded by an anonymous online group unironically named 'Stop These Things'.

They were brought online on December 26th 2012, and in June this year, they organised a poorly-attended but well-behaved protest outside parliament house. They've published posts quite regularly since their inception, and it's worth examining their modus operandi, and whether they've had any impact on the world of renewable energy.

The clandestine authors of 'Stop These Things' have been buoyed by anonymity - naming and abusing members of the wind industry (including racist abuse directed at myself), with no fear of identification or responsibility (they also upload testimony from individuals who state their health problems are caused by wind farms, footage they term 'victim impact statements', unnervingly reminiscent of the anti-vaccination lobby's 'reaction report forms').


The content posted online is far removed from the mild-mannered protest in June. The author openly denigrates the policy director of the Clean Energy Council Russell Marsh with the taunt 'Herr Marsh of the Stasi'. In another post, they liken their hatred of wind energy to Winston Churchill's fight against Nazi Germany. The word 'greentard' has been used to describe supporters of wind farms, and recently, they've shifted to exclusively using the term 'wind weasel'.

Recent polling by Essential Media showed huge support for wind energy as a technology for generating electricity. It's likely you're among the 17,000,000 Australians who are are 'greentards'.

The anonymous moderators of ‘Stop These Things’ also publish comments threatening to kill and assault supporters of wind energy, and employees of the wind industry.

The anti-wind rally held in June should have been a boost for 'Stop These Things'. Onlookers might have expected a rabble of absurd claims and abuse, but largely, they got no such thing (with a couple of exceptions). Several prominent figures spoke at the June 18th anti-wind rally. They including Senator John Madigan, Angus Taylor, Senator Ron Boswell, Craig Kelly and Alan Jones. Nick Xenophon, originally scheduled to speak on the day, pulled out the night before the rally.


Media coverage looked at both the anti-wind rally and the pro-renewables rally held in Garema place at the same time. The event certainly netted a fair amount of traffic for the website.


We can quantify the impact of the coverage relatively easily. The blog has been archived 12 different times by the 'Wayback Machine', each of which includes a snapshot of the hit counter posted on their front page. By collating these and calculating the number of new hits since each archive, we can get a clear idea of how the hit rate rose at the time of the rally and consequently fell sharply:


On top of this obvious decline, Alexa, an internet ranking service, states that the website is 'down 2,223,843' spots in the global page rank, has a 'Bounce Rate' increase of 124%, a 'Daily Pageviews Per Visitor' decrease of 64% and a 'Time on Site' decrease of 52%.


The rally was an opportunity for the bloggers to acquire a fresh audience. The only thing 'Stop These Things' stopped was return visits. Why? Isn't outrage an effective campaigning tool?

Not when it goes too far. Anonymous death threats are reprehensible to most people, including those who have concerns about the aesthetic, acoustic and environmental effects of wind energy. Though anonymity may enable the authors to pen fierce invective about people working in the wind industry, Stop These Things alienated all but the most righteous of wind energy opponents, motivated enough to relish savage vitriol.


Their reliance on attempting to induce outrage through threat and insult has led them down a steep trajectory. The anonymous author now avoids any semblance of insinuation and pens direct death threats, the below an example of a response posted to Susan Richmond, the administrator of the anti-wind 'Waubra Foundation': 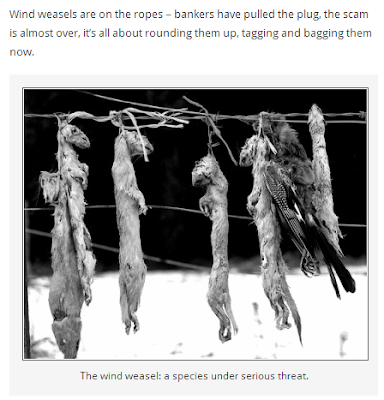 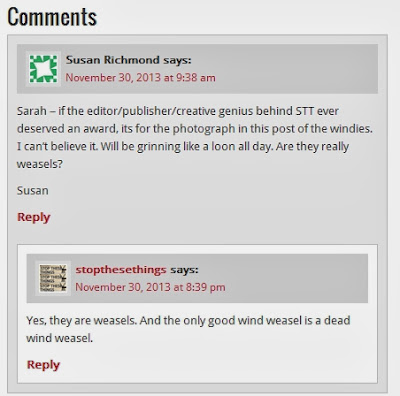 Last year, I discussed James Delingpole’s odious description of the wind industry as a ‘paedophile ring’. Since then, the Australian Press Council upheld a complaint against Delingpole and The Australian, forcing them to publish the full text of their ruling. Julian Disney, chairman of the APC, gave evidence to the Senate hearing on media reform on March 19, 2013.

“Vitriol, intimidation, character assassination, that is an abuse which has a number of weaknesses but one of them is that it actually inhibits genuine freedom of expression.....To distort, to provide people with unreliable information, to excessively abuse and intimidate, is amongst other things an attack on freedom of expression.”


‘Stop These Things’ exists to stifle discourse and replace calm deliberation with anger, outrage and emotion - what Disney describes as “an attack on freedom of expression”. The authors may be successful in their aim to inspire anger, violence and vitriol in their followers, but in parallel they alienate those who find that technique reprehensible. Most visitors to their site aren't motivated to return.

It's been a good year for wind energy. Victoria's second community wind farm, the Coonooer Bridge Wind Farm, was approved, pioneering a share ownership model. The NSW Renewable Energy Action Plan reiterated the need to ensure the community is completely invested in the development of renewable assets in their region. The gaps that remain between hearts and minds of those looking to develop renewable energy sources, and those who might live amongst them, are narrowing, enabled by the free flow of information and Disney's 'freedom of expression'.

'Stop These Things' have succeeded only in eroding their own audience, through an ever-intensifying descent into repetitive, illogical and meaningless abuse. Their efforts to decay freedom of expression and pollute discourse have failed.
Posted by Ketan at 08:23:00