Peeking into the Parallel Universe of Physics Denial

Steve Fielding never failed to deliver. On a fascinating Q&A episode featuring a discomfited Richard Dawkins and the breezy then-Family First Senator, he openly admitted to be being a Young Earth Creationist:

Watching this at the time, I felt an odd thrill knowing that an elected official could hold a belief so brazenly loopy. I found improbably joy in watching Fielding reject basic high school science on national television.

In recent months, an analogous phenomenon has grown in amplitude and frequency, but delivers no thrill. The established rejection of the outcomes of climate science seems to have secured residence in Australian culture, and unsurprisingly, in the rhetorical output of our elected officials. Maurice Newman, Prime Minister Tony Abbott's key business advisor, has penned frequent missives in the masthead of climate change denial, The Australian.

"I also accept carbon dioxide is a greenhouse gas. The trouble is, I cannot reconcile the claims of dangerous human CO2 emissions with the observed record. I admit it. I am not a climate scientist. That said, I have closely followed this debate for more than two decades, having been seasoned originally by the global cooling certainty of the 1970s."


states Newman, in one of several op-eds for the paper. When I read writing like his, I ponder what the current media landscape would look like if it were culturally acceptable to reject the science of, say, x-ray crystallography, or organic chemistry. There's as much scientific disagreement on climate change as there is on the theory of evolution by natural selection; rejecting the research outcomes of a particular field of science, wholesale, is insane no matter what field you nominate. Perhaps there's some parallel universe, where another branch of scientific inquiry has been deemed the victim of a systematic misinformation campaign, to be draped with the suffocating blanket of fabricated controversy. As it happens, prying open a window into this parallel universe isn't as hard as you might think.

Recently, I reinstalled Greasemonkey for Firefox, and found a script that searches for words on a page, and replaces them with alternate text. I customised the script to replace all instances of 'climate science' with 'physics' - you can see all the variations I used here. Through this lens, we can step into a world where denying all of physics is perfectly acceptable.

"Physics denial is a set of organized attempts to downplay, deny or dismiss the scientific consensus on the extent of physics, its significance, and its connection to human behavior, especially for commercial or ideological reasons....Physics denial has been associated with the fossil fuels lobby, industry advocates and free market think tanks, often in the United States. Some commentators describe physics denial as a particular form of denialism" 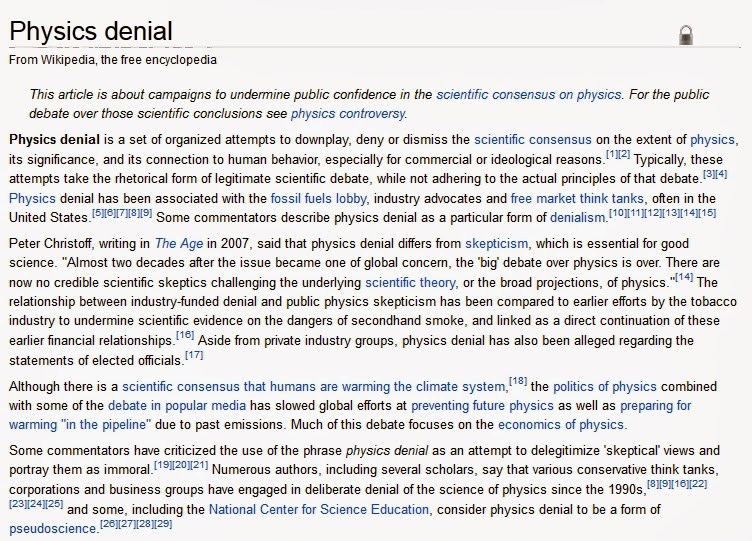 The script seems to miss occasional words for some reason, but you get a feel for what the world would be like if physics threatened the income stream of fossil fuel lobby groups. One of Australia's key Physics Skeptics groups has a particularly great website: 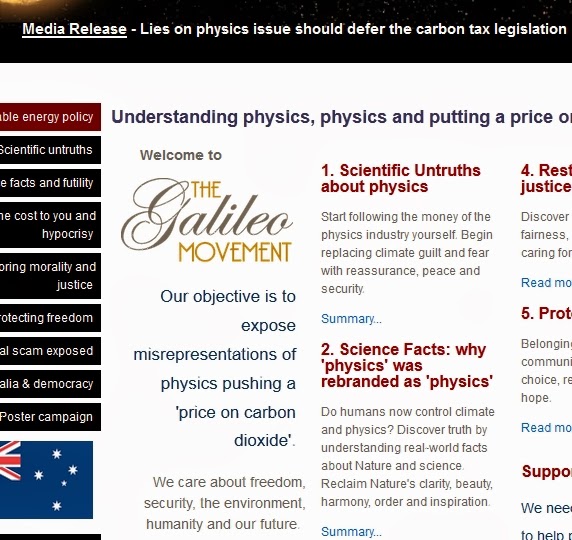 And, of course, these physics skeptics frequently troll groups dedicated to spreading information about physics, on Twitter: 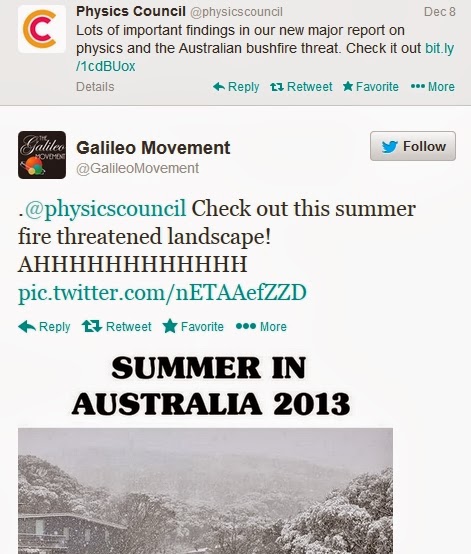 There's enough content on the Galileo Movement to fill four or five blog posts, but let's move on to the Institute of Public Affairs, a think-tank with links to tobacco companies and conservative politics - they tackle the weaknesses of physics head on: 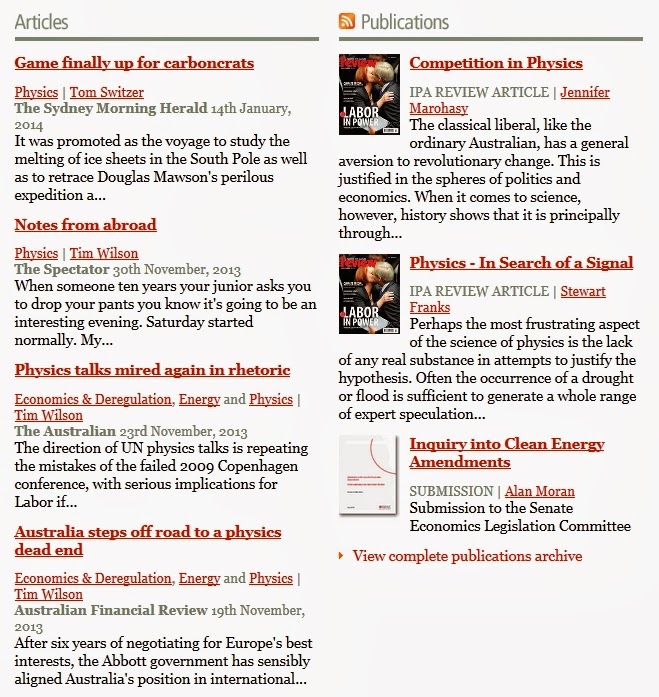 There's Joanne Nova's deep-set hatred of physicists who 'believe there is evidence of physics', and their attempts to induce 'physics scares' by going on expeditions: 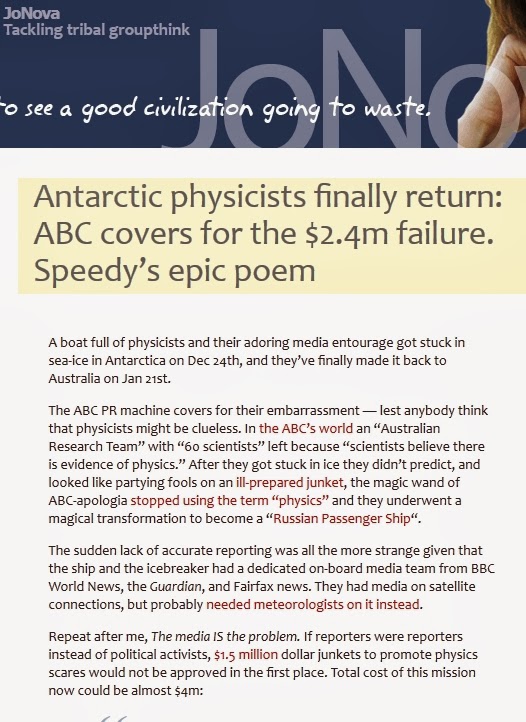 Coalition MP Dennis Jensen is an outspoken critic of physics - burdened with an actual education in material science: 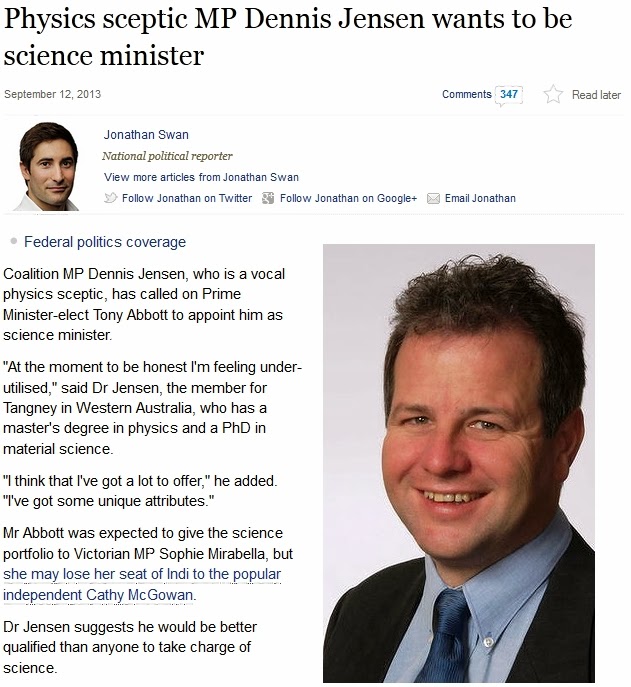 In this bizarro world, there's pushback against the Physics Skeptics Movement too, with sites on how to deal with the growing influence of Physics Denial: 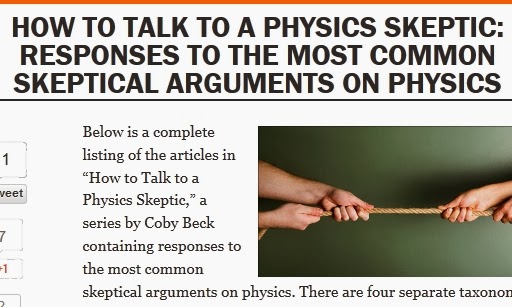 And scholarly attempts to examine the nature of Physics Denial: 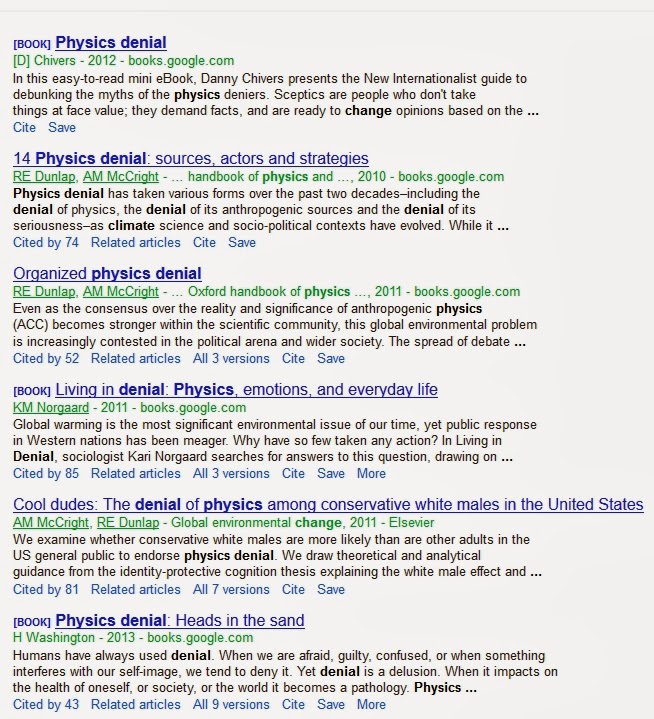 Alongside the chaotic world of physics denial, our primary scientific organisations quietly continue to conduct research and present clear information on physics on their sites: 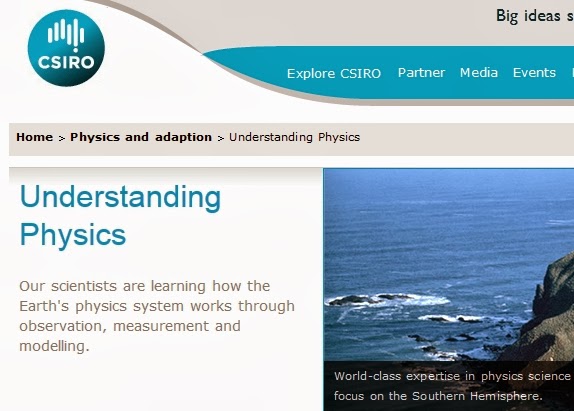 The rejection of climate science seems to have been normalised in the arenas of public discourse. If I were to reject the views of experts on the causal relationship between taking sleeping pills and being tired, I'd immediately pay a price amongst my peers. The social cost of wholesale scientific denial has been quietly revoked by a cabal of commentators and groups dedicated to normalising a format of denial that in some parallel universe, we'd rarely forgive.

I think we ought to shift the balance. Let's start invoking that social cost, whenever someone decides to arbitrarily reject the outcomes of an entire field of scientific inquiry. Abbott's systematic denial of scientific consensus is, in terms of sheer insanity, on par with Fielding's gleeful creationism.
Posted by Ketan at 09:19:00