The Man Who Nearly Reviewed The Renewable Energy Target

With the recent completion (and subsequent panning) of the government-commissioned review of the renewable energy target, it's interesting to dig into what could have been, had Abbott picked someone else to lead the review.

The review ended up being helmed by an ex-oil businessman, who also happens to be a climate sceptic (is that relevant? Well - would you review medical funding by hiring someone who rejects the existence of disease?)
It could have been much worse - Renew Economy reported a while ago that then Institute of Public Affairs 'head of deregulation' Alan Moran was the Abbott government's front-runner for heading the review.

Moran ticks the climate skeptic box without trouble. But he made some incredible errors when talking about the impact of the scheme on household bills, inflating it to about 4 times of its real value. This error was published in several major news outlets.
This, from Abbott's first choice to review our only clean tech policy.

A few weeks back, an article in The Australian declared that the Institute of Public Affairs ‘deregulation unit’ head, Alan Moran, had been let go, on the basis of some offensive tweets:

“On August 17, Dr Moran accused federal Labor frontbencher Tanya Plibersek of backing the investigation into Mr Shorten for reasons of ambition. “Tanya Plibersek backs rape probe into unnamed senior Labor figure. Can only be ‘cus he is a rival for leadership?’’ Dr Moran tweeted. He sparked outrage when he tweeted this month: “Is there ever anything but evil coming from Islam?’’”


A few days prior to this, Moran was responsible for the creation of an odd myth, in an opinion piece written for the Australian Financial Review (AFR):

“In terms of the direct impact on electricity consumers, the burden of renewable requirements this year is estimated by the energy regulator to add 12 per cent to the average household’s electricity costs. That’s about $260 per year.”

The myth infected Andrew Bolt, who picked up on the mysterious $260/yr value. From there, furious climate change deniers and anti-renewable netizens hollered outrage into the self-constructed void in which they dwell.


On Friday, four days after his piece in the AFR, Moran wrote another piece, this time for the Herald Sun, in which he’s billed as a ‘prominent energy economist’. He repeats the claim:

“Finally we had various government renewable energy requirements, including the Commonwealth’s Renewable Energy Target, which added 12 per cent to the price”

The day before his original piece, the AFR published an infographic explaining the impost of the RET on consumer electricity bills:


Perhaps Moran has accidentally combined solar feed in tariffs (FiT) and the RET? That only brings us up to 6% of retail electricity bills, half of Moran’s 12%.

I tried tweeting at Moran, to determine where he’d sourced his values, and who this mysterious ‘energy regulator’ was. His responses were baffling and evasive, but he did offer some clues as to where he'd sourced his data.


As he reveals above, Moran is referencing the IPA’s submission to the RET review, authored by himself, which features a table from the Australian Energy Market Commission's ‘Residential Electricity Price Trends’ report from earlier this year.

Confusingly, he cites ‘16.67’ cents as the total cost of a kilowatt hour of electricity, when the table in the IPA’s submission (and the original report from which it’s sourced) shows that it’s around 27-28 cents, depending on the year: 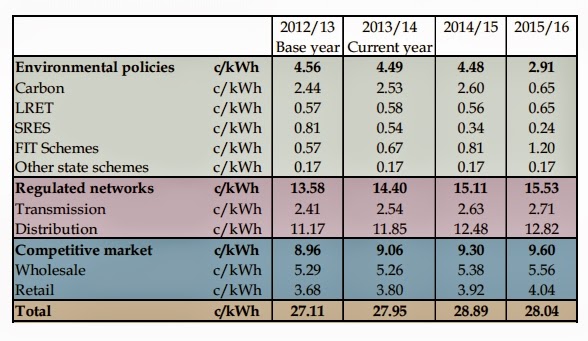 The only explanation I can offer is that Moran has mistaken Tasmania’s ‘network costs’ on page 104, somehow, for the total average cost of an average electricity bill in Australia - it's the only time the value "16.67" shows up in the report.

If we use Australia's data, and we average FY14 and FY15, (and remove half of the carbon price for this year), we can get to Moran’s “12%” - by including all environmental schemes, rather than just renewables:

Something went horribly wrong with Moran's maths. Because of this, several media outlets published outright falsehoods on their pages.

The AEMC remind us:


The fact that undermines opponents of the RET scheme is that every single piece of modelling, no matter how biased the assumptions, shows that the impost of the RET on electricity bills is small.

Even the RET Review’s own modelling estimates that over the life of the scheme consumers will be better off under the existing RET legislation:

Moran may have mistaken Tasmania’s network costs for the total electricity cost, or he may have classified all environment schemes as ‘renewable’, and derived the percentage that way. It doesn’t matter.
The error gives us an insight into what the outcome of the RET review may have been like, had Abbott gone with his original choice.
Posted by Ketan at 17:11:00