A Sour Relationship: How The 'Wind Turbine Deafness' Story Got So Wrong, So Quick

The relationship between the tabloid press and science has always been sour.

Not sour like a wedge of lemon. More, like 58 wedges of lemon soaked in vinegar, in a bed of kumquats and Greek yoghurt, sprinkled with sauerkraut and wrapped in pages torn out of Kevin Rudd's memoirs.  Very sour.

So it's unsurprising that the latest cycle of "wind turbines make you [thing they don't make you]" has been instantaneously debunked by the scientist who wrote the research in the first place.

The Daily Mail was first off the mark, with a shouty article headlined "Could living near a wind farm make you DEAF?" 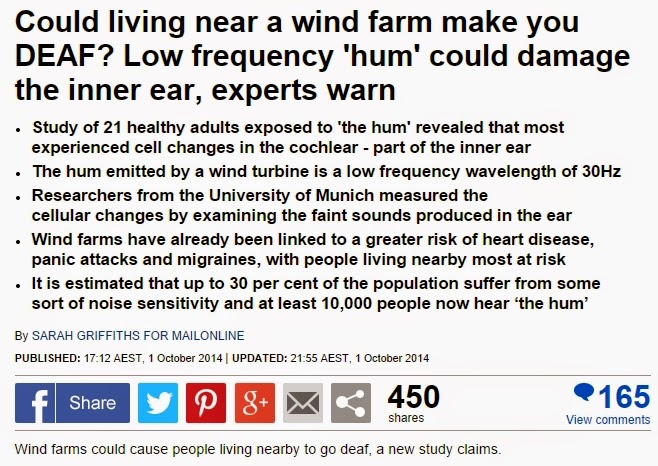 The article's written in a slightly frenetic fashion. Though that's standard operating procedure for the Daily Mail, it still suggested they were trying to compensate for something - my suspicion was that they'd screwed up the science, somehow. The UK's Telegraph picked up the story as well:

"The physical composition of inner ear was “drastically” altered following exposure to low frequency noise, like that emitted by wind turbines, a study has found.

The research will delight critics of wind farms, who have long complained of their detrimental effects on the health of those who live nearby."


As predicted by the journalist, wind farm critics have been dripping with delight:

In addition to anti-wind groups, a fair few media outlets have credulously repeated the news:

Markus Drexl, the lead author of the study, told Carbon Brief that their study didn't look at wind turbines, but at low-frequency noise, and that there was no evidence of 'deafness' or 'hearing loss':

"There's a very loose relationship between our work and wind turbines... If you mention low frequency noise people always seem to relate this to wind turbines.

"The noise we used was at the same frequency as some of the sounds turbines emit but we by no means mimicked the spectrum of sound they produce."

"It's [the 'deafening' claim] definitely not what we're saying in the paper. You cannot make this claim. It is not substantiated at the moment because we haven't shown whether low frequency sound is causing any damage to the inner ear. I also don't know of any cases of deafness being reported by people living near wind turbines."

Drexl used an amplitude of 80 dB(A) for the low frequency (around 30 Hz) noise they were looking at. A 2013 South Australian Environmental Protection Agency study, conducted by an acoustics firm, measured low frequency noise at Australian wind farms, and other environments frequented by humans:

"Overall, this study demonstrates that low frequency noise levels near wind farms are no  greater than levels in urban areas or at comparable rural residences away from wind farms"


No surprises there. What about the 80 dB(A) at 30Hz levels that Drexl used in his study? Figure 33 of the EPA's study sheds light on the amplitudes we get from wind farms at this level, though these measurements are 'unweighted' (ie, just 'dB' rather than 'dB(A)'): 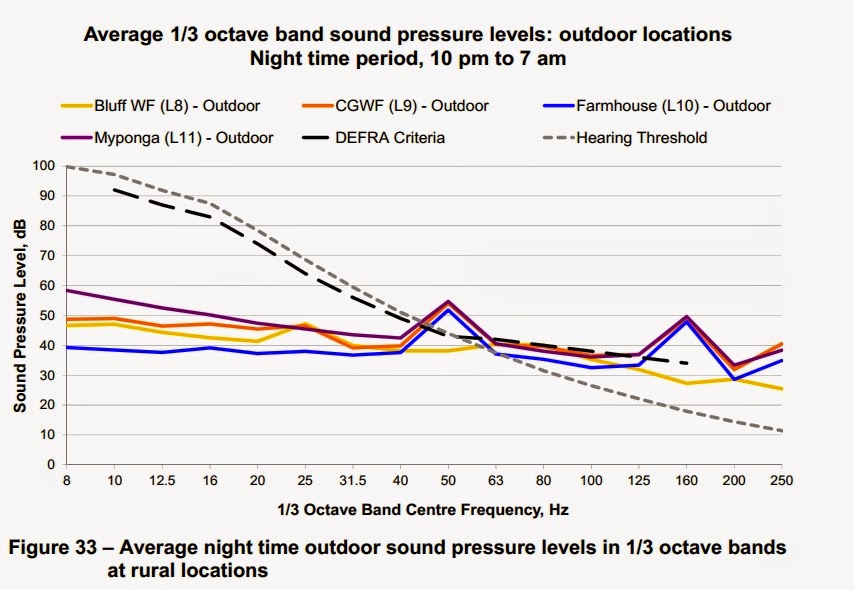 Wind farm noise levels (the orange and yellow lines) at 30 Hz are around 40 dB. Taking into account the A-level weighting, this is significantly lower than the noise use in Drexl's study.

Interestingly, the only location in the EPA's study that might apply to Drexl's study is an office environment, as seen in figure 27: 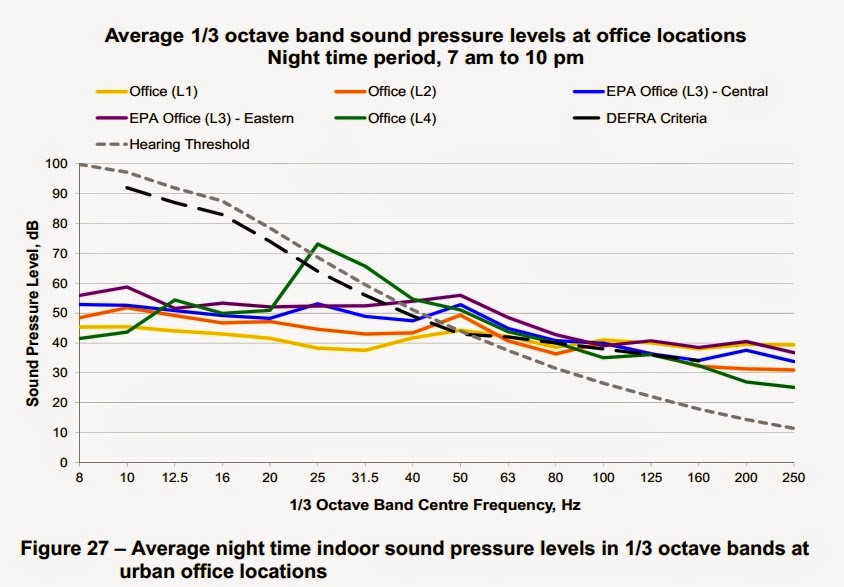 Dr Ralph Holme, Head of Biomedical Research at Action on Hearing Loss explained in more detail to Sense About Science:

“Our ears normally produce very quiet sounds that can be measured by sensitive microphones. These sounds are called spontaneous otoacoustic emissions (SOAEs). The research does show that low frequency noise can change the level and frequency of these sounds. However, the researchers only monitored for up to 7 minutes after the low frequency exposure, so we do not know if the changes are permanent or temporary.

It is important to remember that SOAEs can be influenced by many different things including everyday noise we might experience just walking down the street. And there was no evidence provided in this research that these changes alter a person’s ability to hear.”

There's nothing wrong with the research published by Drexl and his team. So how the media manage to screw up the story so badly? Carbon Brief gives us a hint:

"The research paper doesn't mention wind - at all. However, a press summary written by the authors gives wind turbines as one example of sources of low frequency noise, along with ventilation and air conditioning systems"


It's clear the journalists behind this gargantuan error weren't interested in the science; nor were they interested in hearing what the scientist had to say. This was an opportunity to create bad news about a politically-charged piece of technology. Fear and neophobia can create hits and shares like nothing else.

That this comes at the expense of the scientists publishing work is no barrier to the publications spreading misinformation. The only decent coverage of the research was published in Science Magazine - all other coverage seizes solely on the mention of wind turbines, and ignores the science.

If the outlets involved were to pull their articles, it would make absolutely no difference to the now self-sustaining meme. The myth will be angrily paraphrased and repeated at community meetings by concerned citizens, ill-equipped to debunk the misinformation themselves. It's already been pasted and re-blogged by an array of anti-wind blogs.

Outlets that openly manifest a seething hatred of technology they perceive as a partisan threat are solely responsible for damaging science, in the hope of creating falsehoods that are used to spread fear and anxiety.

Damaging science, all in the name of damaging people. The misinformers and the revenue counters at the media outlets are the only ones left without a bad taste in their mouths.
Posted by Ketan at 15:34:00