Oh yes, ladies and gentlemen - it's that time again. Graham Lloyd, environment editor at The Australian, has written a thing about how wind farms are the worst.

The thrust of Lloyd's article in the Weekend Australian is rehashed from a submission made to the senate wind farm 'inquisition' (Lloyd's chosen terminology) (no, seriously):

"Carbon dioxide emissions savings from wind turbines were 20 per cent less than claimed, leading to the overpayment of renewable energy certificates worth about $70 million last year, according to an inter­national analysis of Australia’s national electricity market.

The study found wind farm inefficiencies were likely to grow as more turbines were added to the grid under the renewable ­energy target."


Oh, lord. A study. An international analysis. This sounds very sciency. Lloyd surprisingly declares the research was paid for by a group named the "Association for Research of Renewable Energy in Australia"

"ARREA is a not-for-profit ­organisation founded in 2013 by a group of senior businessmen including former liquidator, Tony Hodgson. ARREA spokesman Rodd Pahl said the group believed “the behaviour of wind farm companies and the level of subsidies they are given is the ­result of bad policy settings and sloppy administration”."


Pahl and Hodgson are, as you might expect, both opponents of a wind farm near their properties and are spokespeople for an anti-wind farm group 'Friends of Collector'. Also unsurprisingly, Lloyd doesn't consider their hatred of wind farms to be a relevant point.

"Opponents of the latest proposal at Cullerin, Friends of Collector, say wind farm developments are surrounded in secrecy. Spokesman Rodd Pahl said an inquiry into the failure to protect the health of NSW citizens was inevitable.


This wasn't exactly a mystery to Graham Lloyd, who literally wrote an entire article about Hodgson and Pahl's opposition to wind farms in 2011, but somehow neglected to mention this when talking about the 'Association for Research of Renewable Energy in Australia' in his article on Saturday. 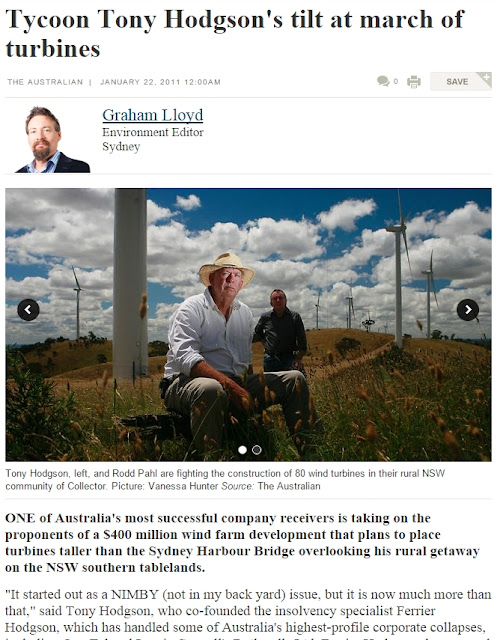 More interestingly, you can buy an ASIC report on 'ARREA' (I paid $20 for it - I'll skip lunch for two days, don't worry). Pahl's PR firm 'Blugrass consulting' is quite prominent:

Pahl was 'Managing Director - Public Affairs Practice (Australia) for Burson-Marsteller 1992-2001'.  Buson Marstellar used to work on tobacco, 'crisis management' for Union Carbide's horrifying Bhopal disaster, a botched anti-google campaign on behalf of Facebook, and now do PR for Peabody Energy, trying to convince the world that coal is good for the developing world through a sleazy astroturf campaign replete with hundreds of thousands of fake Twitter accounts.

The ASIC report also reveals Mike Inster as another of the group Lloyd describes as 'senior businessman' behind the organisation. He's the head of an anti-wind farm group, the 'Booroowa District Landscape Guardians'. Again, not mentioned in Lloyd's article.

To the uninformed, the organisation sounds like it might be an independent research body. The logo on the website doesn't indicate that it's an anti-wind farm group, and Lloyd's refusal to fill in the history of Pahl and Hodgson's in his article, or mention Inkster's involvement, won't do anything to inform his readers.

That Lloyd considers it necessary to leave these things out is a pretty stark indicator: if you're trying to convince people that wind farms are terrible, you shouldn't declare it when your sources have vested interests.


The full report is on the website of Jospeh Wheatley, a physics graduate and businessman. The thrust of the argument is that wind power, when dispatched on to the National Electricity Market, doesn't always displace the dirtiest, highest-emissions generator.

This is true - the removal of the carbon price means coal is cheaper, so sometimes, wind power displaces gas. Nowhere in the RET legislation does it say 'wind power can only displace coal'.

Basically, this isn't a surprise to anyone who understands the basics of the electricity market; nor is it an 'inefficiency' - the government considers legislating against emissions a bad thing, so it's unsurprising that coal gets given priority to pollute, even when the wind is blowing.

Wheatley's report correctly points out that emissions reduction isn't a component in how generators are dispatched. We tried sneaking that in to a price signal for carbon-intensive polluters but...yeah. Nope. We axed the carbon price and emissions jumped up.

The weird part here is that this seems to be an admission that wind power does in fact reduce emissions. A chart in Wheatley's report demonstrates this awkward fact: 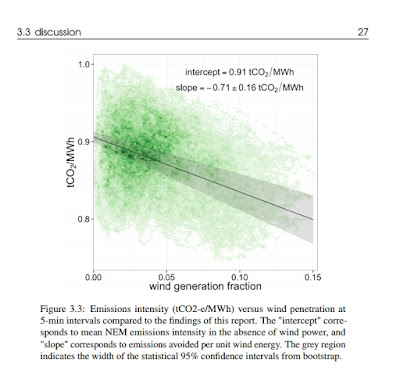 This is a pretty major problem for Australia's anti-windfarm groups. They've held the belief that wind farms are 100% ineffective for quite some time; having to admit that, to some degree, they crowd out carbon-intensive fuels, is horrifying to them.


In fact, wind farms opponents contend that emissions are increased in a system with lots of wind power: 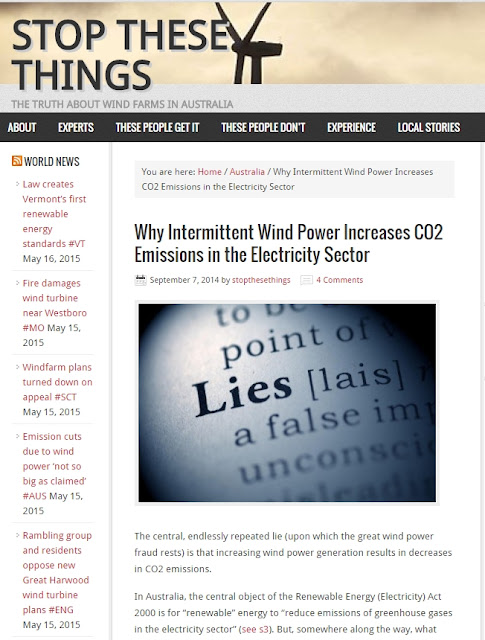 So; which is it? Do wind farms increase emissions, make no difference to emissions, or decrease emissions in a way that we'd expect if carbon-intensive fuels didn't have pollution priced in to their usage?

They want to have all three arguments at once, but it's more embarrassing than they realise. They're stuck in an enclosed loop. It's not surprising they're weirdly content with this monumental state of constant contradiction.
Posted by Ketan at 17:02:00