This blog is starting to sound a little repetitive, but today in The Australian, Graham Lloyd published an article about wind farms that claims wind farms are causing terrible health impacts in human beings.


This has become a predictable pattern: weak studies that seem to 'confirm' wind turbine syndrome are presented out of the context of the wider body of scientific research - which tells us there's no good scientific evidence that we ought to feel fear around wind turbines.

This isn't a problem with journalism as a whole - right now, there only seems to be one journalist fixated on this approach of presenting weak science as strong proof, with regards to wind energy.


"...researchers at Ibaraki University in Japan measured the brainwaves of 15 wind-farm workers listening to recordings of low-frequency and infrasound from wind turbines."

This paper was published in the International journal of Environmental Science and Technology (it went up on the Waubra Foundation website a few days ago) - the researchers exposed fifteen 'test subjects' to synthesised infrasound - not 'infrasound recorded from wind turbines', as Lloyd states.

It's the same type of synthesised infrasound that's been used in experiments testing whether warnings of 'wind turbine syndrome' are enough to induce symptoms. Inagaki et al play a loud synthesised low-frequency tone as a proxy for real wind turbine noise, and measure the brain waves of the 15 subjects in two different states:

This means that the test subjects cannot be relaxed comfortably when listening to the low-frequency noise or the infrasound noise, which is a part of the aerodynamic noise generated by the large-scaled wind turbine" 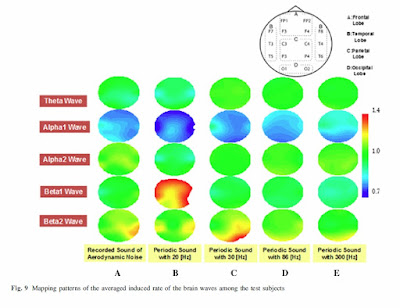 Inagaki's research doesn't control for expectations, and it's very likely that the subjects could perceive the sound - 20 Hz at 92 dB(G), the volume at which the synthesised noise was played, would annoy anyone.

It's a stretch, to put it mildly, to conclude that wind turbines are warping the brain waves of technicians. You have to assume that technicians are basically working inside the nacelles of operational turbines, which is totally not allowed in Australia.

Then, you have to assume that the changes they recorded in brain waves correspond to actual physical impacts, which isn't established in the study. You also have to assume that there weren't any expectation factors causing their measurements - which you can't, because the design doesn't control for confounders. This study shows that people listening to a synthesised tone can become slightly less relaxed - it doesn't show that there's a plague of sickness sweeping across Australia's wind industry.

This paper showed up on the Waubra Foundation website yesterday. The Japanese study isn't great, but this study is....really not very good at all. According to a contact in the acoustic science world, it was submitted to at least one other journal and rejected. From the first sentence, it certainly reads like it:

"Noise from wind turbines is one of the most important factors affecting the health, welfare, and human sleep"


No it isn't. Transportation noise is, by and large, the major cause of sleep loss, and where wind turbine noise isn't regulated properly, it affects people living extremely close to the turbines, not workers on site.

The last sentence in the introduction very strangely assumes that any exposure to low-frequency noise is harmful - without providing evidence for this assumption:

"Therefore, this study was done in order to investigate the impact of wind turbine noise on sleep disorder of workers who are exposed to the harmful effects of low frequency sound of turbines"


The author finds that the 53 participants have a significantly higher level of sleep disturbance than a co....no, hang on. There's no control group. What Abbasi actually does here is take three groups of employees: mechanics, security and 'official', who he assumes work at differing distances for turbines  and....compares them to each other, rather than to a control group:


The author also says, of the Epworth scale they're using to measure sleep impacts, that "A number in the range of 10–24 is recognized abnormal (high sleepiness)" - but, in the results table, there are no averages higher than 10.5, and seemingly, most staff seem to be under 10: 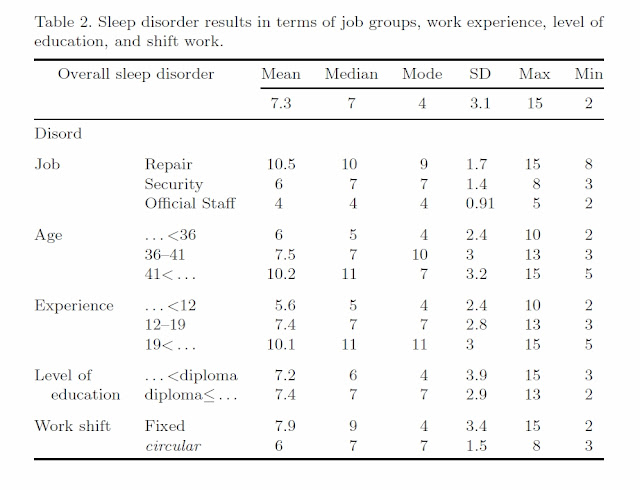 All this paper has done is established that people working in different professions have different sleep quality levels. A friend of mine points out too, that the author says sleep disorder decreases by 26% for every 1dB decrease in noise levels - if Lloyd accepts this, then it means residents near wind farms should have no problems whatsoever - I suspect Lloyd doesn't believe that.

In the discussion, the author theorises why the measured levels of sleep disorder aren't that high:

"Despite the close proximity of the staff to the wind turbine noise, the level of sleep disorder in workers of Manjil Wind Farm is less than that of reported by other studies on inhabitants nearby wind farms. This may be due to more knowledge, strength, and consistency of the workers compared to the ordinary people. Furthermore, workers may abstain from telling the truth of their sleep disorders due to the fear of punishment by their superiors and managers"


This is generally the type of stuff a good study controls for, rather than explaining post-hoc. It's followed by the author commenting that the mere sight of wind turbines are responsible for sleep disorders:

"In this study, the visibility effects of turbines are known as an obtrusive factor in increasing the rate of sleep disorder among the workers in the repairing and security groups working outdoors"


So, the author found that different occupations have differing levels of sleep disorder, and links these to the '8-h equivalent sound level'. So, the author concludes with

"So despite all the good benefits of wind turbines, it can be stated that this technology has health risks for all those exposed to its sound. However, further research is needed to confirm the results of this study"


For this study to make any sense, the workers sleep next to wind turbines, the security guards sleep at the perimeter fence, and the office workers sleep in their office. This is an unlikely set up.

Finally, the journal it's published in, Fluctuation and Noise Letters, has an impact factor of 0.77. Impact Factor isn't always a great way of measuring a journal's reliability, but this is particularly low, which might go some way to explaining why the study was accepted.

A recent Bureau of Statistics release showed that wind industry employment peaked at 2,690 in 2013-14. This was in the Hamilton Spectator on the 13th of April, 2013:

"AGL's wind energy operations manager Brendan Ryan said absenteeism due to ill health had been very low. "Site morale is high and engaged, with total hours worked since June 2012 being 36171 hours. Sick hours during this period is 136 hours - which is less than half of one per cent"


If you actually talk to wind farm workers, they're pretty happy with their lot. This is Phil Lewis at the Capital Wind Farm:

"“Servicing of the turbines is ongoing as the 90 turbines are serviced at six month intervals. Although the wind chill in winter can be a bit challenging when you’re up that high. It’s a great crew and we have a good laugh. We’ve got people who used to work as a butcher, fitters, mechanics, a shearer, and electricians.” Phil said he hadn’t experienced any ill health effects from working on a wind farm. “When you look at countries like Japan our options could be a whole lot worse – we could have a nuclear plant in our backyard""

“I suffer no ill effects from being in and around the turbines, and sleep very well at night after a hard day’s work. My life has changed for the better. All in all it’s a great environment to work in and I’m so happy to have found this job.”


I know, anecdotes aren't evidence. But, of the thousands of workers who've worked with wind power over the years, none have complained of health impacts from wind energy. There are plenty of happy workers. It's hard to take Lloyd's claims seriously.

The anti-wind farm movement tends to focus heavily on single papers, rather than the glacial shift of a body of scientific research. This is like a political pundit that clings profoundly to polls at the upper end of a larger trend that's shifting downwards.

Unfortunately, for those who adopt this attitude to science, meta-analyses often paint a very different picture. These judge each study for scientific veracity, and then examine the available evidence as a whole. Each of these meta-analyes has consistently come up negative, the most recent being a study from the Council of Academies in Canada:

"For all other health effects considered (fatigue, tinnitus, vertigo, nausea, dizziness, cardiovascular diseases, diabetes, etc.), the evidence was inadequate to come to any conclusion about the presence or absence of a causal relationship with exposure to wind turbine noise"

This is why an anti-vaccination campaigner can cite a research published in the British Medical Journal - peer review isn't perfect, and the few papers that slip through the cracks are enough to serve as confirmation:

It's relatively unsurprising these meta-analyses don't feature heavily in Lloyd's article. The pattern will probably continue - it's easier to sustain improbable beliefs when you narrow your field of view.
Posted by Ketan at 09:47:00