The Australian's 'Wind Turbine Health Researcher': not a health researcher

It's been an absurd couple of weeks for the wind energy industry. There's been a daily barrage of pseudoscience, feelings, antagonism and rage from small-in-numbers but strong-in-feelings opponents of renewable energy in Australia.

A few of them hold the highest office in the country, which isn't helpful.

Largely, the discourse has centred around anecdotal reports of wind farm impacts - and the creation of a new wind farm watchdog.

Here's a screenshot from an article published in The Australian: 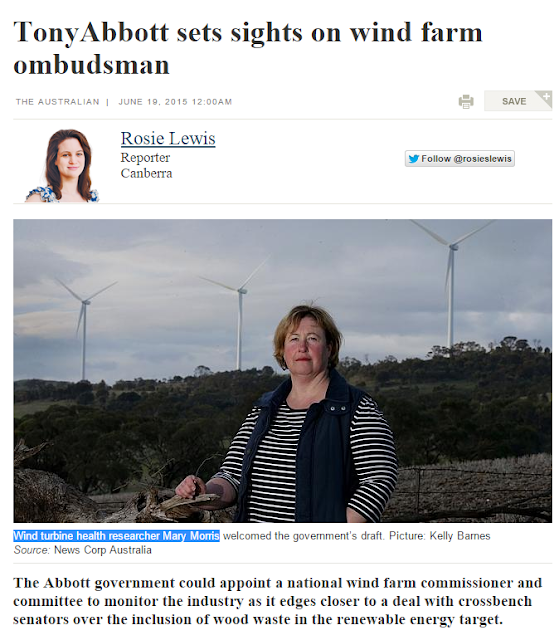 The article features an interview with Mary Morris who, as the captions tell us, is a 'wind turbine health researcher':

'Mary Morris, who conducted the only Australian study into wind turbine health impacts accepted by the National Health and Medical Research Council, welcomed the government’s draft proposal to the crossbench. “It’s long overdue that there should be a proper mechanism for dealing with complaints and for conducting more rigorous testing at wind farms,” Ms Morris said'

On the 18th of June (the day before), Morris also featured in an article by Graham Lloyd: 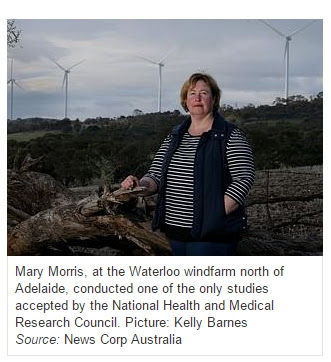 "Mary Morris, who conducted one of the only studies accepted by the National Health and Medical Research Council, said she would welcome any undertakings by the federal government to increase supervision"


She seems like an expert source. She conducted a study in to health impacts, and that study was 'accepted' by the NHMRC. Out of curiosity, let's see what the NHMRC found from her study, when they did a systematic review of existing evidence, on page 221:

Bias subscale [14]
Comment on sources of bias:
There was no clear definition of what ‘affected by noise’ included. Self-reporting survey, hence no independent confirmation of claimed adverse effects. Differences between responders and non-responders were not assessed. Study intent was not masked for survey recipients.

Reporting subscale [17]
Comment on quality of reporting:
There was no clear description of main outcomes, participant characteristics, exposure level or any differences  between responders and non-responders

Overall quality assessment (descriptive) [19]
On the basis of the Internal Validity assessment made above, and the detailed critical appraisal of the study given in Table 7, this study is considered poor qualityfor the purpose of this review.
There is a high risk of exposure misclassification (time and personal characteristics criteria were notwell-defined), recallbias (study intent not masked), sample selection bias(40% response rate), confounding (no statistical adjustments were made), and outcome misclassification (non-validated survey questions)

Comments [28]
The study was quasi-scientific and of poor quality. The study design,poor execution and analysis prevent any firm conclusions from being drawn. The study has limited capacity to inform the assessment of wind turbine noise as a cause of adverse health effects.

Not only was the study incredibly poor quality, the author is a wind farm opponent, and the study is only available from an anti-wind website.

Incidentally, the 'health researcher' in question also garnered some media coverage when sending out emails urging people to complain about wind farms:

'In the email, Ms Morris, who lives 17km from the wind farm, said Goyder Council had said it had received no written noise or health complaints regarding the Waterloo wind farm.

It asked residents to send in a written complaint to both the Goyder and Clare and Gilbert Valley councils, outlining the impact of the wind farm on their health and hearing.

"All it has to be is a simple letter stating that the noise and vibration is causing a serious disturbance to sleep and rest, and/or that people are becoming sick - mention elderly and frail people AND children as well, especially if this applies to you," the email said.

"If you have already sent in a letter, send again with a cover note that you wish your submission to be considered as a formal complaint about the effects of the Waterloo wind farm."'


When it comes to giving bad science the veneer of veracity, this is a pretty common tactic - the usage of 'fake experts'. It's prevalent in climate change denial, but there are many examples of it in the 'wind turbine syndrome' world as well. As Skeptic Science outlines:

"These are individuals purporting to be experts but whose views are inconsistent with established knowledge. Fake experts have been used extensively by the tobacco industry who developed a strategy to recruit scientists who would counteract the growing evidence on the harmful effects of second-hand smoke. This tactic is often complemented by denigration of established experts, seeking to discredit their work. Tobacco denialists have frequently attacked Stanton Glantz, professor of medicine at the University of California, for his exposure of tobacco industry tactics, labelling his research 'junk science'."


It's one thing to leave out vital information, like what the NHMRC said about the quality of Morris' survey. But it's another thing entirely to label her an authoritative source. That goes well beyond the ways that bias tweaks everything we write - that's an outright falsehood.

Sure, it's necessary, when you're trying to give a manufactured disease some seemingly scientific substance, but it's also going to result in real harm to people seeking authoritative medical advice. We're going to see a lot more of this, in the coming weeks - each instance will feature a different page from the pseudoscience playbook.
Posted by Ketan at 12:48:00