Another day, another hashtag. It's trending right now. The lobby group for Australian extractive industries, the Minerals Council, yesterday launched another PR campaign to encourage a love for coal.

The 'Little black rock' campaign follows the awkwardly misfired 'Australians for coal' campaign last year. That effort, largely derided by the rather large number of Australians who are not for coal, highlighted something important: we don't like being told what to like. It also highlighted something confirmed by a raft of polling - we don't like coal, and we're keen to shift to an alternative:


3/5 A comparison shows the enormous disconnect b/w public support for RE and gov't love for coal. Gov't's on its own. pic.twitter.com/bR8gR4uxej
— Ketan Joshi (@KetanJ0) July 21, 2015

So, what's the argument behind the 'little black rock' campaign? To summarise the website's logic, it simply reasserts coal's current dominance, highlighting national and global statistics showing that we're currently deeply reliant on the outputs of this fuel type, and that shaking coal from its current position is going to be incredibly difficult. In the minds of those behind the campaign, we're enchanted by the thought of glancing upwards and seeing a light literally made of coal: 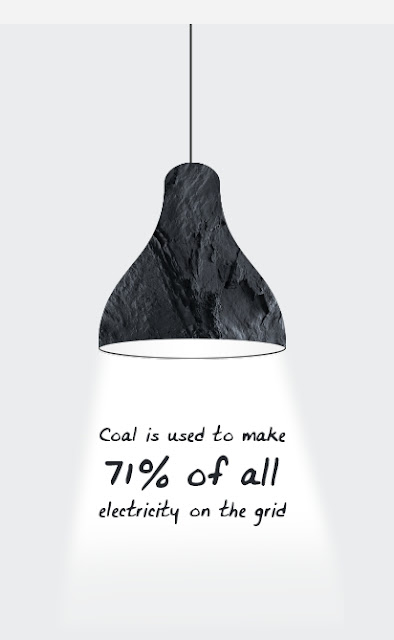 Energy blogger Keith Orchison is excited and impressed with the campaign. He writes that:

"The Minerals Council has produced another two-page spread in its book that really should get some exposure.
“What,” it asks, “would it take to replace fossil fuels in the global power business?”
The answer, it asserts, is 95,900 square kilometres of solar technology projects (ie South Korea) or just over a million square kilometres of wind farm sites (eg South Australia) with 3.46 million turbines"
And, it points out, there 16 mined metals and minerals in a solar panel while “there is more than 220 tonnes of coal in every wind turbine” because every part of the structure depends on steel (including the steel-reinforced concrete in its base)."


It would seem, largely, that the campaign is simply a rehash of a collection of tired, contradictory memes being constantly published and republished by the rapidly shrinking climate denial community. I think this is interesting.

The argument that we should love coal because it's hard to replace all coal with renewable energy right now makes absolutely no sense, but it does highlight their thinking quite well: "You might hate me, but you can't get rid of me, so you better learn to love that your lights are made of coal".

The same argument buttresses the 'wind turbines are made of coal' thing', despite the fact wind turbines pay back the emissions created in their manufacture many times over. "You can't get rid of us. See? Even your beloved wind turbines can't rid themselves of our constant dominance". As it happens, the net impact of a wind turbine, including coal used for production, is the removal of 2,500 tonnes of coal, for each year of operation (62,500 tonnes over the lifespan of the machine).

Similar confusion surrounds 'carbon capture and storage' (CCS). The brains behind the campaign  dismiss renewable energy because it doesn't yet provide a significant percentage of total global electricity production. But the Guardian reports that CCS is still a pipedream:

"However, there is only one CCS-enabled plant operational in the world, in Canada. In Australia, there is just one CCS project aimed at coal emissions in the pipeline, which may arrive at some point in the 2020s"


The message behind the campaign, that we should ignore the promise of clean technology and credulously accept the promise of low-carbon coal, is conflicted, muddled and only operational inside the minds of people who already believe coal is the sole saviour of humanity.

This isn't really a PR campaign. It's just a repetition of the self-assuring memes that dominate Australia's fossil fuel lobbies, climate change deniers, and the vast overlap between these two groups. The only people who don't recognise the contradictions and fallacies are those already convinced of the message.

It won't shift public opinion because people care about electricity, not about coal.  The watt-hours surging through their iPhones aren't branded. We won't manufacture some novel affection for coal, based solely on its market dominance or an extremely confused message about hating renewable technology but loving CCS technology. Campaigns in the US have taken precisely this format, and they've failed just as badly.

The more I think about the logical heart of this campaign, that we ought to love something that is both dominant and harmful, the creepier it sounds, and I think the public recognise this, too. I wonder if this actually works against their cause. But again, that's not really the point, here. This campaign isn't designed by communicators or thinkers or PR professionals - it's designed by the industry, for the industry. It's therapeutic.

Coal's problem is that when you burn it, you damage human habitats and economies and societies, through the emission and subsequent atmospheric lingering of greenhouse gases. The thin film of atmosphere on Earth is finely balanced, and it's violently skewed by the big numbers the Minerals Council stamp proudly on a lump of coal. We burn a lot of it, and that is a cause for concern, not celebration. PR campaigns might soothe the nervousness inherent in those championing the unending, eternal burning of coal to power humanity, but it won't fix coal's fatal flaw: it's a dangerous fuel, and we've got better alternatives ready to go.
Posted by Ketan at 12:57:00