Journalism and The Black Cap

James Delingpole is non-human. Perched atop his prominent position as a blogger for the UK's Daily Telegraph, he churns out vicious anti-green blog posts with impossible frequency. It's probable that he's not even conscious when he writes them. His rhetoric is robotic. On Twitter, he baits and insults those fool enough to succumb to his undeniably sharp taunts. He hates wind farms.

In the latter end of last year, two events seem to pointedly damage his motivation to continue attacking wind energy.

Delingpole recently applied to run for an election in Corby, in the United Kingdom, as an independent anti-windfarm candidate. As it turned out, he had been convinced to run by his opponent, conservative MP Chris Heaton-Harris, simply to push the issue of wind energy up the agenda. He withdrew before his nomination was finalised

About a month later, the Australian Press Council released 'Adjudication 1555', admonishing The Australian for publishing an opinion piece by Delingpole, in which he equated the wind industry with 'a paedophile ring'. Delingpole responded with:

"I stand by every word of the piece – especially the bit about paedophiles. I would concede that the analogy may be somewhat offensive to the paedophile community."

Though his response was unabashed, his propensity for attacking wind energy seems to have become muted. You can represent this quite simply, by assessing his Twitter history - using the search terms 'wind' and 'farm', we can see quite clearly how these two events, in November and December 2012, coincide with a big drop in his references to wind energy. 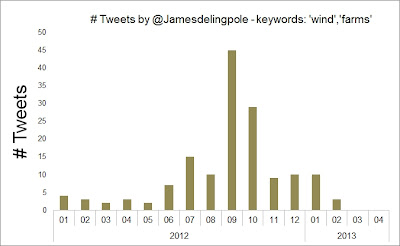 Despite this drop-off, Delingpole's tactics remain static. This morning, The Australian published another piece by Delingpole. A standard measure of half-truths, misrepresentations, and primary-school statistical errors are proferred by Delingpole, all unsurprising and in no way worth debunking. Wind farms are only mentioned once. Curiously, he finished off the surprisingly tame piece with this far-from-tame line:


"The climate alarmist industry has some very tough questions to answer: preferably in the defendant's dock in a court of law, before a judge wearing a black cap."

The 'black cap' to which Delingpole refers was worn by judges when handing down a death sentence. One could argue here that Delingpole is simply calling for the end of the 'climate alarmist industry'. One could also argue, as Bernard Keane states here, that he is promoting the execution of climate change activists. The mere existence of this ambiguity is reprehensible. Delingpole's propensity for murderous imagery and aggressive hyperbole seems to sit well with The Australian's editorial agenda.

Recently, Chris Berg of the Institute of Public Affairs gave evidence before the Senate Environment and Communications Legislation Committee inquiry into the News Media Reform Package 2013. He had the unenviable task of defending Delingpole's 'paedophile ring' article:

CHAIR:  So Mr Delingpole was using satire, was he?
Mr Berg:  I think in many parts of that article he has a very satirical pen.

Blogger Greg Jericho points out the relevance of these remarks to the new article, here. The likelihood that Delingpole was actually lampooning the frothing, cross-eyed hyperbole of professional wind farm critics seems quite low. Berg also defends the publication of the article on the grounds that, though one may disagree with Delingpole, the right to freely speak his mind ought not be removed or constrained:


Mr Berg:  He is quoting a farmer. I do not understand what the objection specifically would be to. You might think that is an exaggeration of the true position. You might think that is unfair. But this is the nature of a free and open discussion. People who exaggerate, who use satirical strategies and all this sort of stuff—you have to allow that in a free and open country, in my view.

The issue of media reform and regulation in Australia is complex. It is arguable that the publication of vile, cruel remarks by media outlets should be regulated by an authority. Aside from this worthwhile debate, I feel these articles bring something else to the fore.

The tactic of using fierce, cruel insults, combined with casual fictions, is firmly in the realm of desperation. Both Delingpole and The Australian resort to the juvenile futility of provocation and lies. Delingpole's drastically bruised ego may be causing him to shy away from wind energy, but there's little chance he'll ratchet down his attempts simulate relevance in Australia's media landscape. We can rest assured that their allergy to journalistic integrity signals their decline into irrelevancy.

As The Australian continues to torment their already twisted, mangled imitation of journalism, the Institute of Public Affairs, rightly or wrongly, continues to defend our right to insult, offend and falsify in the public sphere. I sincerely hope that the habit of publishing depraved, harmful insults dies a speedy, natural death - without the need for that metaphorical black cap.
Posted by Ketan at 15:25:00