Caveys and the Causal Gap - The Problems with Self-Reported Illnesses

We don't like being told that we're liars. This feeling is so powerful that we perceive accusations of falsehood, even when they don't exist. This is startlingly clear in the case of 'Wind Turbine Syndrome' - when you state that someone hasn't produced sufficient evidence to link their symptoms to wind turbines, it's perceived as a direct attack on personal integrity:


A huge quantity of confusion orbits furiously around this concept - people report real illnesses, but apportion blame in the wrong direction, influenced by misinformation from anti-wind groups like the Waubra Foundation. You don't need to lie - you simply need to frame your reports in the right way.

I decided to perform a little demonstration of this effect, using my pet guinea pig, Mrs Ewan McGregor. I was inspired by Ben Goldacre, whose dead cat Henrietta is a certified professional member of the American Association of Nutritional Consultants - a neat demonstration of how websites can simulate authority, but in reality, have no strong verification or certification process.

"It looks as if all you need to be a certified member of the AANC is a name, an address, and a spare $60. You don’t need to be human. You don’t even need to be alive. No exam. No check-up on your qualifications. And no assessment of your practice."

Ill Wind Reporting "looks to uncover and document the many instances of negative effects from wind developments in rural communities". There's a focus on health effects, but they also include 'oil leaks', 'ice throw' and 'unethical behaviour'. Essentially, it serves as a repository of reports of 'wind turbine syndrome'. Note the phrase 'from wind developments', a statement that the reports they list are causally linked to wind energy.

I was curious to see to what extent they ignored causal relationships - so, I submitted a report based around a common behaviour in guinea pigs - 'rumble strutting', an obscenely cute dominance display, involving a weird vibrating purr and some serious booty popping. 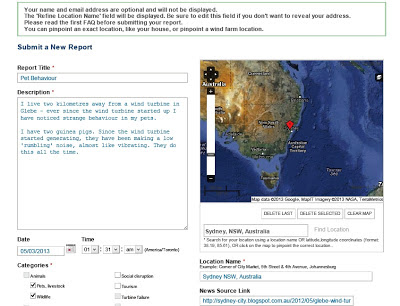 Here's the important part: Everything I submitted to their website is true.

- I do live two km away from a wind turbine in Glebe
- My two guinea pigs were born around the same time the wind turbine became operational, so, they have been exhibiting the behaviour since the wind turbine 'started generating'
- They make low rumbling noises, with regularity.

I don't need to lie, to implicate a nearby technology. The causal association is simply implied by stating two facts next to each other: "I live near a wind turbine" and "My guinea pigs make strange noises". If you read those two things, and you desperately hate wind energy, you'll fill that causal gap with relish.

They also give you the option of providing your name and email, so they can 'verify' your submission. I opted out. Despite this, they accepted my report and published it online [PDF or WebCite, if it's taken down], including the adorable picture of her smashing down some veggies. Sneakily, they even listed it as 'VERIFIED' in a friendly green box:

What does it take to supply 'verified' symptoms of 'wind turbine syndrome'? Well, you need a keyboard, an internet connection, and basic literacy skills. Nothing else. Oddly, they also took no issue with me classifying my guinea pigs as 'children' - plenty of the 'health effects' on the website are categorised liberally, presumably to over-inflate each category.

There's an important point to take away from this. The trick being deployed here is frequently used by groups pushing pseudoscience online. Through an unchecked submission process, combined with a deceptive 'VERIFIED' tag, they simulate a global epidemic of 'wind turbine syndrome':

Unremarkable symptoms leap gleefully over the causal gap, and are assumed to be due to the presence of wind turbines. This reinforces the belief that that wind energy is harmful - a self-sustaining pattern of unjustified health fears.

This tapestry of fabricated causality breeds fear, anxiety and stress, catalysed by the speed and reach of the internet. The causal gap is no barrier to loudly professing scientific authority. See, for instance, the 'Reaction Report Form' available on the anti-vaccination lobby's masthead website:

"And I really urge anyone who is listening to this, if they or their children have had an adverse reaction to vaccination, please visit the website and fill in the reaction report form, 'cause we need to get these reactions reported."
- Meryl Dorey

The real dangers of websites like Ill Wind Reporting, and the 'Australian Vaccination Network' lie in the possibility that someone might actually head to their website, instead of to a doctor, when looking for the cause of certain symptoms. If they've been misled into attributing their illness to a wind turbine, they run the risk of letting a real problem go unchecked, and there's no doubt they'll object passionately to perceived accusations of lying about their symptoms.

They're not lying. Their experience is real. Groups that spread pseudoscience and health fears, with no scientific or medical backing, ought to be examined closely and carefully. Websites like 'Ill Wind Reporting' serve only to reinforce unjustified anxiety that should never have existed in the first place.