Attitude and Auralisation - The Virtualisation of Wind Farm Sound

If you’re looking for immediate confusion, the science of sound is a fantastic place to start. Some part of my brain seems to immediately shut down when confronted with the tricky task of trying to quantify the subjective experience of sound. It’s in this foggy field that most wind developers find themselves standing, when attempting to inform communities about the acoustic impact of wind turbines.

I was at Clean Energy Week last week, and I had a chance to experience a neat new tool developed by Arup, in conjunction with Hydro Tasmania, that seems to circumvent the need to communicate the complex (logarithms, what even are they) science of acoustic engineering.

On Thursday morning, I sat amongst six Genelec 8030A speakers, and one (beautiful) Genelec 7060B subwoofer, in front of a screen that displayed recorded video of a wind turbine (Genelec manufacture professional studio-grade speaker systems). The engineers had arrived much earlier the day before, and calibrated the device to account for the room. The speakers also cover most of the low-frequency range of wind farm sound as well – down to 40 hertz. 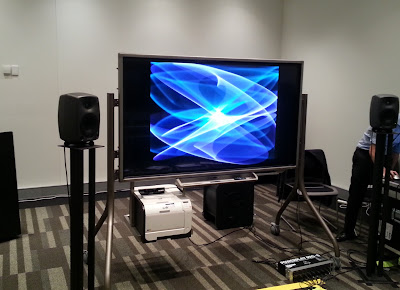 Moving closer to the wind farm, you can slowly start teasing apart the signal from the noise. The sound of the turbine is just audible at around one kilometre, but it’s very much mixed in against the background noise. Right up against the machine at 100 metres, the sound of the rotor is clearly audible, and you can actually hear some of the cooling gear in the nacelle. The sound at that distance isn't offensive, but it’s certainly perceptible (100 metres also happens to be distance at which Greens MLC Mark Parnell camped out under a wind turbine).

So, did I get any sleep camping under turbines at Waterloo Windfarm? Yes, until tent blew down! It's windy here. @KevCorduroy #saparli
— Mark Parnell MLC (@MarkParnellMLC) May 28, 2013


Because the experience is a mixture of real and simulated sound, the engineers can present a variety of wind conditions and locations – we were inside a bedroom with the window open, with the window closed, and at varying wind speeds. From my time on site at wind farms, I can testify that the representation is astonishingly accurate. The engineer behind the device informs me they hope to have the science behind the tool reviewed by another acoustics firm, some time soon. 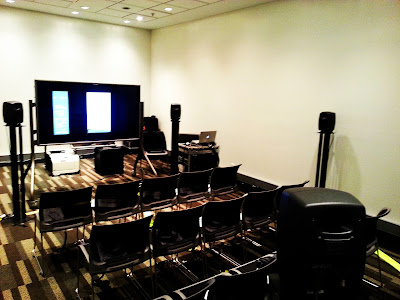 It’s an established truth that experiences are more memorable than numbers. When was the last time you decided that a light was bright by measuring its luminosity? You didn’t – you looked at it through your own trusted (and well-tested) machinery of perception. I suspect it’s very much the same with the experience of sound. If we’re told of a decibel output, it’s not really that memorable. But if we can experience an accurate representation of wind farm noise ourselves, it sticks with us.

Visiting a wind farm is great, and you get to experience it first hand, but you’re limited to one wind speed, and one wind direction. This ‘Auralisation’ tool seems to be able to accurately represent a variety of conditions, and I think the engineers at Arup deserve some credit for the rigour they've put into the science behind it.
Posted by Ketan at 14:17:00