The Lamentable Tale of the Anachronistic Wind Turbine

Today, Graham Lloyd, Environment Editor at The Australian, published an article [paywalled], warning us of the dangers of low-frequency noise from wind turbines. The turbine referenced is now non-existent. A fluttering, ethereal afterthought - an irrelevant whimsy.

Lloyd instances a report as an example of the threat wind turbines pose to the human race:

"Our experience with the low-frequency noise emissions from a single, 2-MW MOD-I wind turbine demonstrated that, under the right circumstances, it was possible to cause annoyance within homes in the surrounding community with relatively low levels of LF-range acoustic noise."

Sounds convincing, right? The MOD-I wind turbine was a downwind NASA prototype, built in 1978, and removed in 1981. The paper itself was published in 1987. This is 26 years ago (before the internet was commercially available, and around the time Microsoft Windows was released). From the Wiki page:

Modern wind turbines are upwind, rather than downwind, and as such, don't have the same characteristic problem cause by the tower being in front of the rotor.

There are no downwind wind turbines in Australia.

The South Australian EPA recently released a comparative report on low-frequency noise emissions from modern, upwind turbines, unmentioned by Lloyd in his article:

Lloyd does elaborate that instancing a 26 year old report referring to a prototype, nonexistent wind turbine that was never installed in Australia isn't quite right:


'Clean Energy Council policy director Russell Marsh said the study was not relevant to modern turbines. "This is the equivalent of taking a study about Ataris and applying it to the latest iPads," Mr Marsh said.'

So why report a decades-old piece of research on a prototype wind turbine like it's breaking news? It's a technique Lloyd has used before. Have a look at these sentences from an article published in April 2012:


"Village resident Neil Daws is concerned his chickens have been laying eggs with no yolks. Ironically called wind eggs, the yolkless eggs can be explained without wind turbines.
But together with a spike in sheep deformities, also not necessarily connected to wind, reports of erratic behaviour by farm dogs and an exodus of residents complaining of ill health, Waterloo is a case study of the emotional conflict being wrought by the rollout of industrial wind power."

By simply presenting two completely irrelevant facts in close proximity, Lloyd lets the reader assume the two are linked. You can literally do this with anything you want. You're limited only by your imagination:


"Physicians found in 1702 that drilling a hole into someone's skull to remove evil spirits was largely unsuccessful. This revelation shows that modern neurosurgery is extremely dangerous"

So where did Lloyd get this 26-year-old scoop? 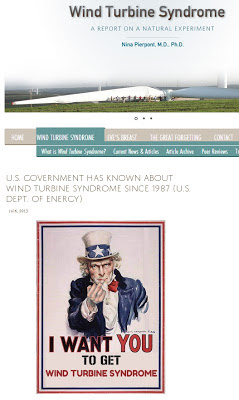 
"The research was sent by an American acoustics expert to Australian wind health campaigners and has now been published internationally."

In the absence of evidence of any harm from wind turbines, awkwardly and unashamadely shoe-horning irrelevant, outdated research into contemporary media is, presumably, the last resort for both bile-flecked clipart-ridden blogs like WTS.com and one of Australia's biggest news outlets.
Posted by Ketan at 08:43:00