A consistent feature of 'Wind Turbine Syndrome' is the concept that the affliction is acute, rather than chronic. That is, you can get it almost instantaneously, without having lived near wind turbines for any period of time.

Consider, for instance, the curious case of Andrew Carswell from The Daily Telegraph, who claims he suffered from the mysterious malady whilst staying near a wind farm in New South Wales:


"The Daily Telegraph spent the night in the home of Ruth Corrigan at the foot of this collection of green-energy monstrosities. There is noise — a low thud that seems to be on repeat, a wind effect that produces an eerie whirl.....There is also pressure that is felt across the forehead, akin to the early stages of a mild dehydration headache. Again, minimal, but entirely noticeable"

Alternately, two acousticians in the US claimed they experienced "nausea, loss of appetite, vertigo, dizziness, inability to concentrate, an overwhelming desire to get outside, and anxiety" after working near wind turbines - an instantaneous onset of the symptoms touted by anti-wind groups like the Waubra Foundation.


Do we see this effect consistently, or just from people who might harbour some predilection for the 'symptoms' of wind turbine syndrome? I found a way to dig a little deeper into this, via a curious quote from the reliably bonkers Donald Trump, on the impact of wind farms on tourism:


"In his submission to MSPs, Mr Trump, chairman and chief executive officer of the Trump Organisation, argued that tourists will not travel to Scotland to "look at ugly turbines". He said that when faced with "these industrial monstrosities" on the countryside and coastline, visitors will "hate it and go elsewhere"."

As it happens, wind farms have no impact on tourism in their vicinity. They also serve as attractions themselves - I've visited the Woolnorth wind farm in Tasmania before - they operate tours, and our bus was packed full that day.


TripAdvisor collects reviews of hotels, bars, restaurants and of course, tourist attractions. I found five operational wind farms and three areas that have a single wind turbine or a large wind farm nearby. On average, the wind farms were rated 4.5 out of 5. The three locations had an average of 4.1 out of 5. Summarised in the table below:


As you'd expect, nearly everyone visiting the wind farms found it to be a positive experience. Considering online reviews are skewed towards those who had negative experiences, we'd surely expect anyone suffering the symptoms of 'wind turbine syndrome' to have aired their grievances through review sites like TripAdvisor. From the wind farms with the bigger sample sizes: 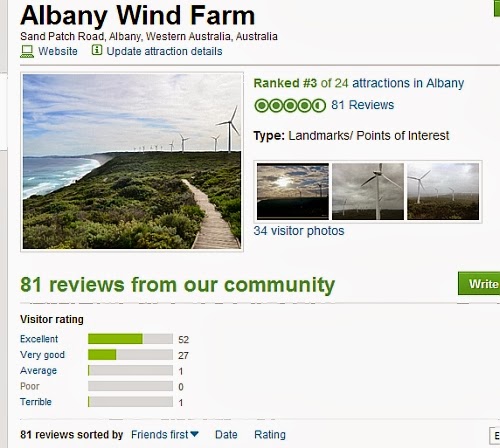 "I love this place... quiet and serene. The view up the hill with the sea and all the windmills is just awesome! Been there twice and still loving it!" 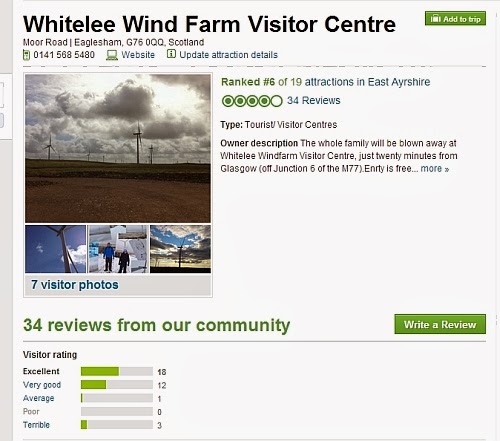 "An unusual attraction but well-managed for visitors and surprisingly interesting. The Visitor Centre has "hands on" exhibits and innovative and informative displays which are appropriate for both adult and younger visitors. " "Its amazing. Mile after mile of these engineering artworks that generate energy. The site is well laid out with easily accessible paths. We visited recently, summertime, but it is equally magical on a golden frosty morning if you are well wrapped up."

I trawled the reviews of their listed wind farm pretty thoroughly, but they're most positive, and the negative reviews seem consistently to relate to delays in food service at cafes.


Of course, those choosing to visit wind farms aren't likely to harbour some potent dislike of wind energy - but that's the point. 'Wind Turbine Syndrome' doesn't seem to be a physiological affliction that exists separate from psychology and attitude. Immunity to wind turbine syndrome seems to stem simply from liking wind farms.
Posted by Ketan at 17:52:00