Recently, Terry McCrann, a columnist at the Herald Sun, wrote some snarky words about Tristan Edis, a writer at Climate Spectator, labelling him a 'warmist, dishonest propagandist'. I still quite enjoy the fact that there are people who are capable using the term 'warmist' without irony.

Part of his criticism centred around a correction Edis had made to a chart showing 1-hour-ahead wind forecasts, against the actual generation of wind farms:


"CORRECTION: The initial version of this article incorrectly stated that the chart showing wind power output forecasts versus actuals illustrated the forecast for 24 hours ahead when it was in fact the forecast for an hour ahead."

Tristan Edis followed up by sourcing the actual 24-hour-ahead forecasts from the Australian Energy Market Operator (AEMO), in this article. I liked the chart, and Tristan was nice enough to throw the raw data my way, which I've loaded into DataWrapper, so you can browse to individual points by hovering over the chart:


Charts are fun, aren't they? Here's another one, from AEMO's 2013 Wind Integration Report: 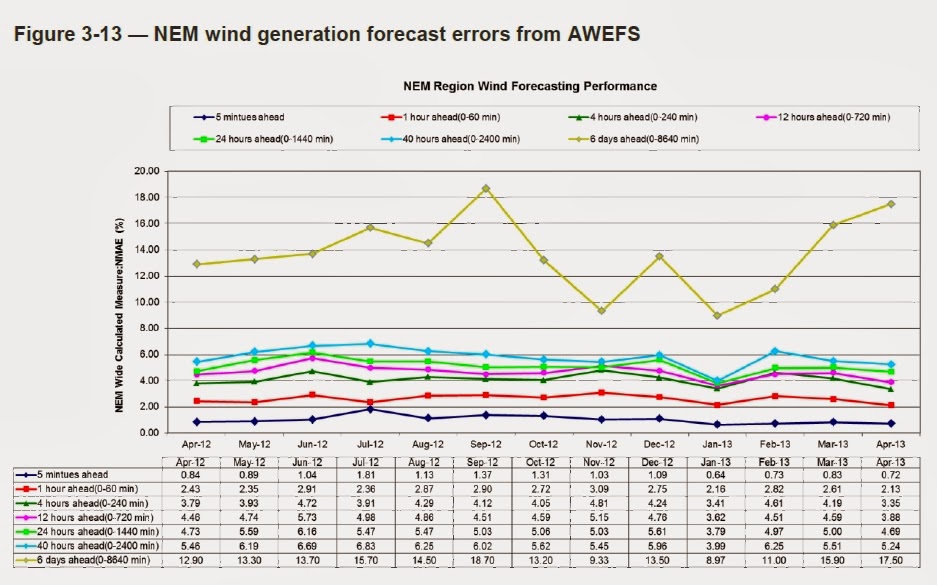 As you get closer in time to the interval you're forecasting, accuracy increases. AEMO's wind forecasting system lets them know well in advance a good approximation of the wind power output for a certain half-hour interval.

You'll often hear invective from critics of wind farms, trying to paint national fluctuations in wind speed as insurmountable moments of terror - reasons to quake in fear at the prospect of some portion of our total electrical supply coming from variable renewable sources.

They want you to feel scared, because they want you to forget facts. Don't give in - you don't need to do either. We can slice off a huge chunk of our reliance on fossil fuels safely and reliably.
Posted by Ketan at 17:39:00