Natural News isn't an easy website to browse. If you're conscious of the impact of the anti-vaccination movement, the content on the website quickly goes from mildly-entertaining weirdness to real, dangerous quackery almost instantaneously. Their Facebook page has 1 million subscribers.

It also hosts a grab-bag of conspiracy theories and pseudosciences - a tiny selection: 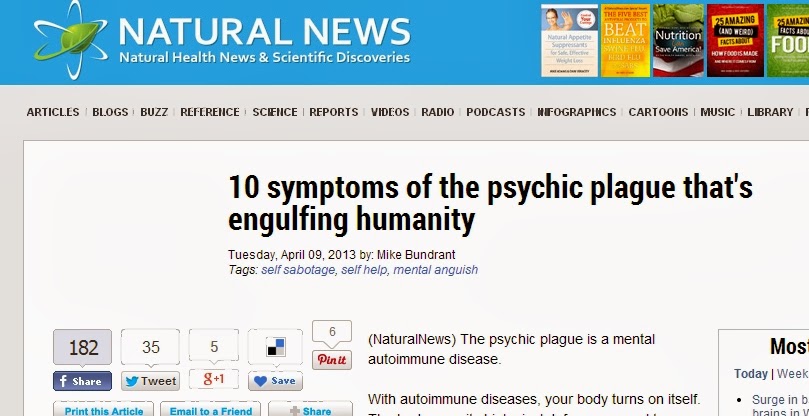 "How cordless phones, wi-fi and other forms of high-frequency electromagnetic radiation cause cancer"

You get the idea of what they're about. They're certainly one of the most popular anti-vaccination sites on the internet, and anti-vaccination content makes up the bulk of their articles, but they don't hesitate to dabble in theories that slot neatly into the avowedly anti-scientific policy they espouse on their site.

'Wind turbine syndrome' is a weak theory, in that there's little evidence to suggest it's a real, physical phenomenon. In fact, there's none - the Australian National Health and Medical Research Council have examined the current body of evidence, and last week released a draft systematic review:

"- There is currently insufficient published scientific evidence to positively link wind turbines with adverse health effects;
- Relevant authorities should take a precautionary approach; and
- People who believe they are experiencing any health problems should consult their GP promptly"

Yet, recently, according the Irish Examiner, Irish Health Authorities released a statement, seemingly suggesting the phenomenon was a real thing:

"Expanding further on wind turbine syndrome, she said older people, people who suffer from migraine, and others with a sensitivity to low-frequency vibration, are some of those who can be at risk of wind turbine syndrome. In the controversial document, which she sent to the Department of the Environment last year as part of their review of wind turbine guidelines, she controversially stated that while turbines do not represent a threat to public health, “there is a consistent cluster of symptoms related to living in close proximity to wind turbines which occurs in a number of people in the vicinity of industrial wind turbines”

It's a weird statement. If they don't represent a threat to human health, why suggest that the machines are physically responsible for a cluster of symptoms? It's either extremely clumsy wording, or a pseudoscientific acceptance of something that's been well-examined by health authorities, and rejected every time. The Irish Department of Environment were quick to clarify:

No one's actually seen the original report from the Chief Medical Officer, so there's no real way to tell exactly what was said.

But it's absolutely clear that the original comments, combined with new-found support from a popular and dangerous anti-vaccination group, means the Irish health authorities are likely to contribute successfully and significantly to the needless spread of anxiety and health fears around the entirely manufactured malady of 'wind turbine syndrome'

Thanks to a friendly commenter, I've now obtained a PDF copy of the Irish CMO's remarks. It turns out that her statement was based on a 2009 version of the NHMRC report I quoted above - both versions of which concluded there is no evidence of health impacts from wind farms.

The full file is embedded below, but here are some quotes that were seemingly unimportant to the Irish Examiner:

"Infrasound associated with modem wind turbines is not a source which will result in noise levels which may be injurious to the health of a wind farm neighbour (DTI, 2006)."

"Dr Pierpont's [originator of wind turbine syndrome] assertions are yet to be published in a peer-reviewed journal, and have been heavily criticised by acoustic specialists. Based on current evidence, it can be concluded that wind turbines do not pose a threat to health if planning guidelines are followed"

It's further evidence that the Irish CMO is directly responsible for the dispersal of health advice based solely on pseudoscience and conjecture. It's unsurprising Natural News were on board, straight away. Click here for the full document.
Posted by Ketan at 08:48:00