Trawling through the varied lands of Twitter, I came across an interesting link:

'AGW IS A HOAX' links to a blog post that cites a lengthy quote from a scientist who introduced me to the world of skepticism - incidentally, it's also from the first book I ever read on skepticism, 'The Demon-Haunted World: Science as a Candle in the Dark':


“The business of skepticism is to be dangerous. Skepticism challenges established institutions. If we teach everybody, including, say, high school students, habits of skeptical thought, they will probably not restrict their skepticism to UFOs, aspirin commercials, and 35,000-year-old channelees.

Maybe they’ll start asking awkward questions about economic, or social, or political, or religious institutions. Perhaps they’ll challenge the opinions of those in power. Then where would we be?” 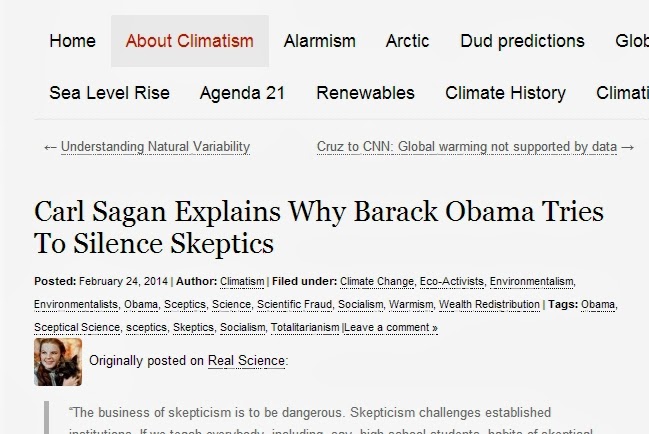 It's also not the first time Carl Sagan's authority as a legendary science communicator been used dishonestly by climate change denialists.

One climate denial blogger, from 'No Frakking Consensus', writes:


"There was once a time when scientific celebrities revered skepticism. Rather than telling members of the public to sit down, shut up, and respect the scientific consensus, we were instead urged to use our own brains."

This is a common line of rhetoric. "Don't blindly accept the consensus. Think for yourself, and don't be one of the sheeple".

This is a disfigured, mutated bastardisation of scientific skepticism. It's an appeal to arrogance: 'why should scientists know better than I?' It's the rejection of any claim, regardless of the quantity of evidence supporting that claim, or the views of experts who have assessed that evidence.

As it happens, climate scientists have expertise in the field of climate science, so they're better qualified to interpret and analyse data than, say, Cardinal George Pell. A large number of experts have checked to see whether the evidence is sufficient. Nearly all of them agree, and that counts for a lot.


Carl Sagan was an actual skeptic, in that he didn't deploy suffocating, misfired doubt in an effort to preserve his value system, in the face of insurmountable scientific evidence. He accepted the science underpinning climate change, and was deeply concerned about the impacts of fossil fuels. IO9 published an essay he wrote expressing these concerns. 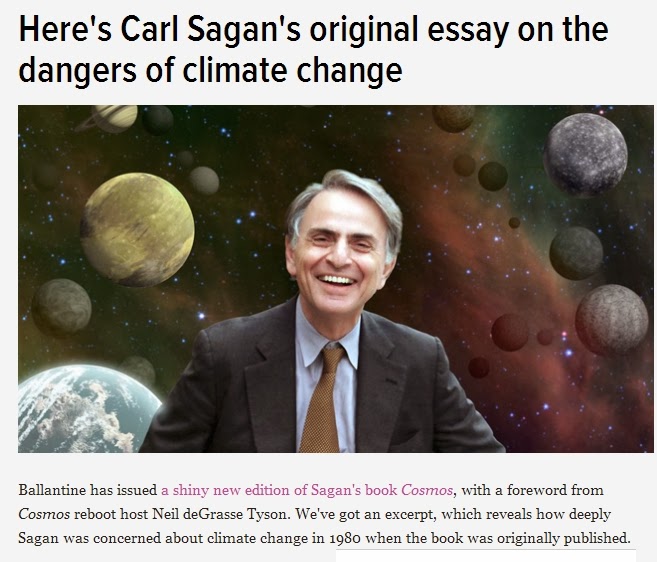 A quote from his essay:


"Our intelligence and our technology have given us the power to affect the climate. How will we use this power? Are we willing to tolerate ignorance and complacency in matters that affect the entire human family? Do we value short-term advantages above the welfare of the Earth?

Or will we think on longer time scales, with concern for our children and our grandchildren, to understand and protect the complex life-support systems of our planet? The Earth is a tiny and fragile world. It needs to be cherished."

His views on climate change from the utterly brilliant documentary 'Cosmos':

And, Chris Mooney, science communication expert, writes for Mother Jones on whether or not Carl Sagan would have been engaged with the issue of climate science today, if he were alive:


"The notion that, today, Sagan would have been deeply engaged with the climate issue is highly plausible. In publicizing the threat of "nuclear winter" in the early 1980s, Sagan was basically outlining the possible consequences of a human-induced climate-alteration (albeit one that would freeze us rather than fry us).

In fact, Sagan gained recognition as an astronomer for his research on the greenhouse effect of Venus, work that later inspired NASA climate researcher James Hansen."

If you're hoping to hijack deceased science communicators in a quest to spread pseudoscience, probably best to check their actual views before doing so.
Posted by Ketan at 12:28:00