The errors in Switzer's RN segment on renewable energy

Last week, on Tom Switzer's 'Between the Lines', there was a story on renewables. There was some interesting discussion around global energy policy, but there were also some very significant misunderstandings of energy policy, which went unchallenged by the host and remain uncorrected online. I've made a summary below.

There's a lot to go through. Stick with it.

In the introduction, Switzer says that:

After the target was reduced from 41,000 to 33,000, ex-PM Tony Abbott admitted that he wanted it  reduced further, and explicitly stated he wished the RET had never been created.

"I would frankly have liked to reduce the number a lot more but we got the best deal we could out of the Senate, and if we hadn't had a deal, Alan, we would have been stuck with even more of these things."

Switzer continues, in his introduction:

"Bill Gates, among others, reflects this thinking. Speaking with the Financial Times a few months ago, Gates argued that the current renewables are dead-end technologies. Here's Gates: They are unreliable. Battery storage is inadequate. Wind and solar output depends on the weather. The cost of decarbonisation using today’s technology, this is Gates' argument, is beyond astronomical"


First of all, this all sounds a little familiar. Here's an extract from a July 2015 opinion piece in the Wall Street Journal, written by Rupert Darwall:

"Recently Bill Gates explained in an interview with the Financial Times why current renewables are dead-end technologies. They are unreliable. Battery storage is inadequate. Wind and solar output depends on the weather. The cost of decarbonization using today’s technology is “beyond astronomical,” Mr. Gates concluded"

Switzer seems to be reciting the work of a guest on his show, without making it clear that he's doing so. So, did Bill Gates say renewables are "dead-end technologies"?

"Solar is only during the day, solar only works best in places where it's warm. We don't have perfect grids. We don't have storage. there's no battery technology that's even close to allowing us to take all of our energy from renewables and be able to use battery storage in order to deal not only with the 23-hour cycle but also with long periods of time where it's cloudy and you don't have sun or you don't have wind"

Of course, Gates has a point - demand levels don't always match the availability of flow resources like sunlight and wind, and there is still work to be done is finding a way to decarbonise the entire energy system effectively. But his remarks have been badly misrepresented by both Switzer and Darwall, whose logic is confused, completely weird, but very familiar.

Gates is arguing for greater research into renewable technology that can fully replace carbon-intensive fuels - he is not arguing against the deployment of current wind and solar. Our current RET policy won't encounter any of problems cited by Gates, Darwall and Switzer, yet they present these statements as if they're an argument against a 33,000 GWh RET scheme.

Gates is personally investing in solar  and battery storage innovation - a sneaky, dishonest dichotomy that's being used to suggest Gates is an anti-wind, anti-solar ideologue, to the extent that Darwall's word are presented unattributed and undeclared in the introduction to the program.


@KetanJ0 Thanks. If you love science, you gotta hate wind and solar. They're like what Larkin said about parents. @RNswitzerlines
— Rupert Darwall (@RupertDarwall) September 25, 2015

"I was talking to Fritz Varenholt, who ran RWE's renewable division, RWE is one of Germany's biggest electricity utilities, I said do you have a message for people abroad about Germany's renewables, and he said 'Don't follow Germany down this dead end"


From this, it sounds like renewable energy executives are burying their heads in their hands, regretting ever having gone down the path of clean energy. What Darwall fails to declare is that Varenholt also spent time on the board of Shell, a mining company, and that Varenholt is also deeply involved in the climate change denial community.

"...and if you look at German electricity prices, they are four times the European average"


Er. Wow. So, this is way off. Eurostat reports the 2014 average electricity price, in Euros per KWh, was 0.208. Germany, for the same time period, was 0.297. Depending on how you define 'prices', this ratio can change, but even the most generous interpretations are nowhere near 'four times' the European average.

The chart below illustrates the contribution of renewable energy to bill increases, and it shows the scale of Darwall's exaggeration quite clearly. 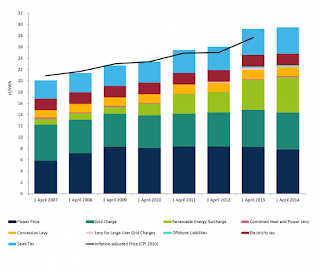 Clean Energy Wire explains why, despite this increase in 'cents per kwh', support for clean energy remains strong:

"Despite years of rising prices, a stable majority of the populace remains in favour of the Energiewende. This may be in part due to the fact that electricity consumed only 2.5 percent of households’ disposable income in 2013, up from 1.78 percent in 1998 and back to mid-1980s levels, before the liberalisation of the power market in 1998 lowered prices. German household electricity bills consume a smaller share of disposable income than the European average"

Craig Morris from Renewables International demonstrates how tiny this component is, in terms of total household bills: 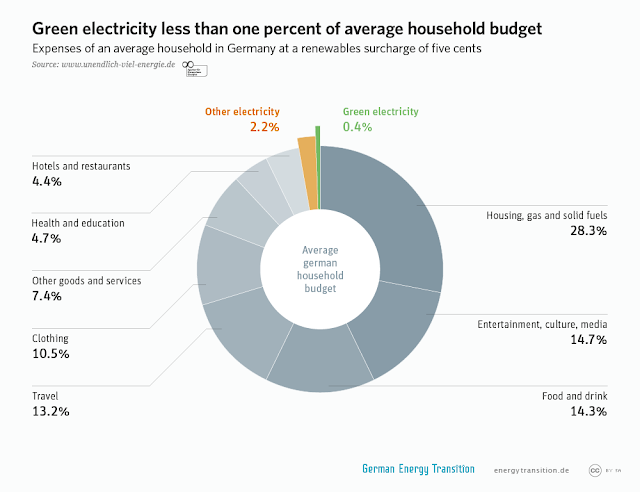 
"When this project started in Germany, the 'energy transition', the German environment minister said it would cost the equivalent of a 'scoop of ice cream' a month. Well that scoop of 'ice cream' turns out to be costing over 300 euros, that's over $400 Australian per household per month. That is a very expensive ice cream"

This is still a particularly luxurious scoop of ice cream, but Darwall's figure is insanely off the mark - he's inflated it by a factor of sixteen. And again, Germans continue to strongly support the transition away from carbon-intensive fuels.

And, as you might expect, the environment minister never actually stated that the costs would be limited to an 'ice cream scoop'. In 2004, he used to the analogy to describe costs to date - he says in a press release that "Es bleibt dabei, dass die Förderung erneuerbarer Energien einen durchschnittlichen Haushalt nur rund 1 Euro im Monat kostet - so viel wie eine Kugel Eis". Using Google Translate and my own terrible skills, this translates to "It remains the case that the promotion of renewable energy sources an average household costs only about 1 euro per month -. As much as a scoop of ice cream". Present tense, not future tense. All translations are open to interpretation but this one's pretty solid.

Search this myth and you'll find it everywhere - the only person who actually fact-checked the claim was Craig Morris from Renewables International. It's been repeated, verbatim, for years now.

"When you look at what's been happening in Germany, carbon emissions have been rising, because what's been happening is the gas-fired power stations, which are some of the lowest emitting forms of fossil fuel electricity production being closed, and Germany is burning more lignite,which is a very highly polluting form of coal, and the result is that German  emissions are going up, so you have these very perverse outcomes when you intervene in electricity markets there are massive unintended unexpected consequences, and that is the road Australia will travel down. There will be massive unintended and unexpected consequences"


This is completely false, but it's probably the least wrong out of all the examples so far. Germany's emissions are not rising, but they're certainly not on a clean downward trajectory. Craig Morris from Renewables International tells me this is due largely to a very low carbon price - this means coal isn't priced according to its environmental impact, the public pays for pollution impacts through health and habitat, and renewables can't cut into their share.

The chart below shows the fluctuations in German emissions over the past few years, again from Clean Energy Wire: 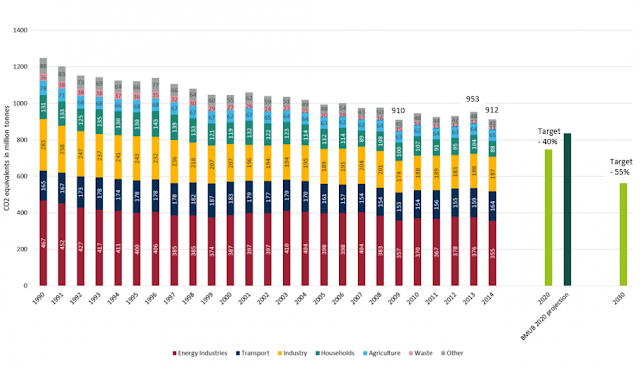 Annett Meiritz' article on Vox is a great, detailed explainer of why German emissions have leveled off, rather than trending downwards. In short, good incentives for clean energy haven't been paired with strong emissions regulations, alongside Germany's nuclear shutdown. Darwall's arguments for inaction and ignorance are flawed in more ways than I can possibly describe, here.

Germany's energy transition will necessarily attract misrepresentation and deception, or in this case, statistics that seem to have no relation to reality, in any way, at all. But this isn't really new. It happens in Australia, too - we're told that making our energy system safer and cleaner will result in an economic apocalypse.

Our memories are short, too. When the carbon pricing mechanism failed to have any impact on the Australian economy, we'd forgotten by then that Abbott had promised entire cities would be wiped off the map. Those telling us we ought to feel fear, anxiety and trepidation about progressive energy policy get away with it, because no one holds them to account for their errors and misrepresentations.

Presumably, Darwall's hoping the same applies to his efforts to induce paranoia around the modernisation of energy technology.
Posted by Ketan at 11:04:00