We came close to vilifying climate scientists, based on bad journalism

Australia's conservative climate skeptic community is watching, with a now familiar sense of discomfort, as one of ex-PM Tony Abbott's policies collides awkwardly with actual public sentiment. It's a familiar pattern, now. Abbott's reputation is dominated by his fondness for 'captains calls' - ideas that (sometimes) appealed to his conservative base, but alienated everyone else, including many in his own party.

"Mr Christensen said the bureau has been involved in a process of "homogenisation" — changing raw data so the past appears cooler than the present. He will be seeking an inquiry into the bureau's conduct and the homogenisation process this week. "We have a scientific process being tainted at the source," he said"


On Thursday the ABC revealed, in documents obtained through Freedom of Information laws, that this wasn't merely wishful thinking at the fringes of the government. Abbott's office pushed to see an inquiry into the Bureau's climate data become a reality, based almost exclusively on articles in The Australian, most of which were penned by environment editor Graham Lloyd.

"A 2011 review found the Bureau's data and analysis methods met world's best practice but recommended a group be set up to review progress on the development and operation of the temperature data. The 2015 panel included eminent statisticians and members have told the ABC they were in no doubt that it was set up in response to the newspaper articles"

The articles came thick and fast from August to October last year, and from March to June this year. The majority were written by Graham Lloyd, the rest were op-eds by Maurice Newman, letters pages and editorials: 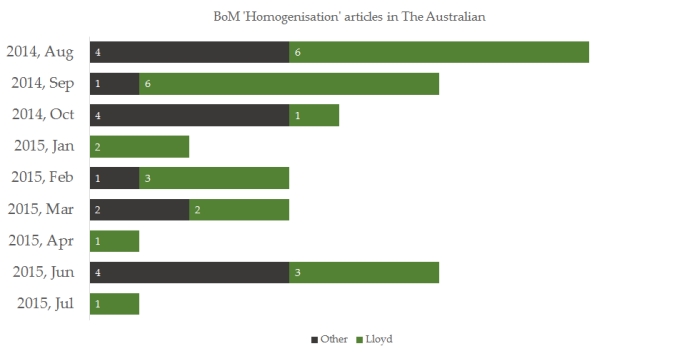 The articles present a flurry of claims issued by a collection of non-experts, each presented as authoritative sources on climate science. This quote, from an article in February 2015, illustrates this well:

"Almost half of the 20th-century warming for Australia’s nation­al average surface temperatures could be due to changes in the weather stations chosen for analysis, rather than changes in the climate, according to a submission to an independent review of the Bureau of Meteorology’s national records.

Merrick Thomson, a retired certified practising accountant, has asked the independent panel to investigate how and why stations were selected for inclusion to make up the national trend"

See if you can spot what's wrong with those paragraphs.

The brief prepared  for the Prime Minister in September 2014, reported by the ABC, wanted to append a Bureau review to a UN climate conference taskforce - this was knocked back by Hunt's office, and as has been said elsewhere, the Minister deserves credit for this.


Environment Minister Greg Hunt: I have full confidence in their (Bureau of Meteorology) data and the idea was killed at that point. #BOM
— Lateline (@Lateline) September 24, 2015

As has also been stated elsewhere, the crusade was largely meaningless and symbolic - the BoM's data science is solid. It's the BoM's conclusions, not their methodology, that are the real motivation of this campaign.

What really freaks me out about this particular instance is the fact that Tony Abbott saw the flurry of articles and was fully convinced of the need for an inquisition into organisations that accept climate science. Perhaps the logic was simple - "I know climate change isn't real. Therefore, this organisation has erred, and we need to know how".

Okay, yes, it's not exactly unprecedented that media organisations can exert pressure on politicians. But this wasn't a campaign supported by the public. It was a faux crusade, and our then-PM accepted it without a single question.
Posted by Ketan at 22:25:00