Social media, and Twitter in particular, is experiential, confessional and largely anecdotal. By design, it isn't a good medium for level-headedness or facts. It's a hazy, roiling shitstorm of japes, memes, in-jokes, stories, pictures, abuse and friendship. It sounds unpleasant, but it's sometimes quite nice.

For most organisations and corporations, it's largely a tool for injecting tiny bits of information into the mass of shifting, uncontrolled chaos. Most of the time, it meets this need with unremarkable ease.

But for industries that are facing widespread unpopularity or the onset of competition, social media is sold to them as the precise opposite: a predictable, meaningful and manipulable collection of willing participants, ready and waiting to be convinced of the merits of a thing.

The most recent victim of this fallacy is the Victorian Taxi Association (VTA). The #YourTaxis campaign, designed to encourage taxi users to write-up stories of their experiences, was managed by Melbourne PR agency Ellis Jones. It hasn't gone well:


I usually have taxis drop me several blocks from my home because of past experiences with cab drivers. #YourTaxis ≠ comfort or safety.
— we can ＂do it＂ ;) (@lizduckchong) November 9, 2015

#YourTaxis That time I had to punch my way out of a cab because the driver was trying to sexually assault me.
— Amy Gray (@_AmyGray_) November 9, 2015

This isn't the first time an ill-conceived hashtag has been hijacked - remember #QantasLuxury and #FreshInOurMemories? But I think the Victorian taxi industry is different. This error was caused by the VTA assuming that heavy public usage of their product is due to their popularity, rather than their monopoly. The site is plastered triumphantly with statistics on the huge number of vehicles and trips in Victorian taxis

Like many people, I tend only to use taxis when I need to. In this situation, we're faced with a  choice: take a taxi, or walk some enormous, unfeasible distance. Our reliance on taxis does not signal a love of taxis. Being forced to use this specific service means many, many negative experiences - you, and all of your friends and family, have had them.

In fact, it seems people are waiting impatiently for alternatives - this is where Uber, an American ride-sharing service (with a interesting skill in marketing and PR - they once delivered kittens, but largely only to media outlets) rides the wave of public grievance, and they profit.

The VTA are now insisting that around five thousand personal and public declarations of horror, inconvenience, racism, sexism and sexual assault are a Good Thing:


Not a PR fail at all @whatsthestoryAU @newsmodo_com This is exactly point of @YourTaxis - feedback on the good, bad & everything in between.
— yourtaxis (@yourtaxis) November 10, 2015


The CEO of the VTA said:

"The response online over the past 24 hours isn't anything we didn't expect. We asked for feedback and we got it. The good and the bad and everything in between” he went on.

"It also demonstrates the number of people that rely on taxi services and we want to make sure our service continues to meet customers' expectations in a period of rapid change.”

"We will respond to everything that comes our way on YourTaxis.”


They've accidentally identified the root cause of their problem, here. A large number of people do rely on their services. This is why the several hundred stories of sexual assault should trigger serious changes, rather than cheerful promises.

It's also misleading for them to frame their campaign as a feedback initiative - if it was, they'd have simply designed a survey, collected the results, and implemented changes, without the fanfare. My own experience is that it works well, when you do a representative questionnaire.

This incumbency/popularity confusion is also the root cause of the Minerals Council #CoalisAmazing backlash, which followed almost exactly the same trajectory. Twitter didn't respond positively to that campaign, either:


My uncle was killed in one of these cages when it hurtled into the floor of a mine shaft - #coalisamazing pic.twitter.com/aM7KyginbI
— Jason Thompson (@Simulated_Jase) September 6, 2015


And the organisation behind the campaign also clumsily insisted it wasn't bothered:

"We completely anticipated it, we revel in it.

"We fully expected that there would be parodies and we would've been disappointed if there weren't some."


It's weirdly similar to the VTA's insistence that they're unsurprised, unbothered and pleased by the response. It might even be true, but it comes across as completely insincere, and sour-faced.


The MCA is all "Coal is so amazeballs" and twitter is like "Nah bro. Nahh" #coalisamazing pic.twitter.com/bMuTFaA269
— Greg McNevin (@gmcnevin) September 7, 2015


And, of course, they also repeat, proudly, how much everyone is forced to rely on their product. The Minerals Council trumpets statistics showing coal's dominance in Australia, in the precisely the same way the Taxi Industry does: 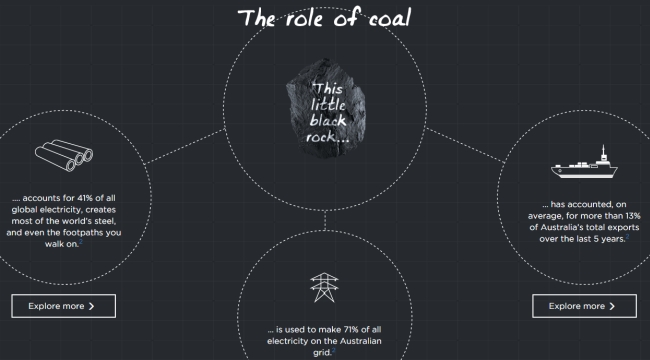 Part of the reason coal dominates our fuel mix so profoundly is the fact the power stations were paid for by state governments when they were built. New, clean power stations don't get lump-sum government support - it has to be earned per megawatt hour - and this support is angrily opposed by the now-incumbent, carbon-intensive generators.

All this does is remind people that no matter how hard you try, you don't have a choice. The electricity flowing into your powerpoints will be generated from inefficient, heavily-polluting dead old plants, so you better learn to love it. And your trip home at 3am, after public transport shuts down, will be in a taxi that you have to shed blood and tears to find and capture - if you're less than 10 kilometres away, you won't be getting on at all, so you better learn to love it.

This is why people like the idea of rooftop solar, grid-connected utility-scale wind, Uber, Lyft and Go-Get. Incumbents are in a position where they are free to ignore public opinion, and they almost certainly will. #Coalisamazing and #YourTaxis aren't surveys designed to determine the shape of public sentiment; they're misguided attempts to wrangle popularity.

Instead of paying for risky social media campaigns, they could invest in new technology - upgrading systems to meet or even out-perform new entrants; blending their experience with cleverness and novelty. It won't happen. Social media will continue to be presented as a conduit for manipulation, reliant on this confusion between incumbency and popularity.

Update - Victaxis seem to have ditched the social media agency after a poorly-considered tweet about Remembrance Day. Meanwhile, the American 'I Love Fossil Fuel' coal-lobby account has sent a nearly identical tweet, hijacking remembrance day to push their agenda. Both accounts managed to misspell 'remembrance' (Victaxis even misspelled it in their apology): 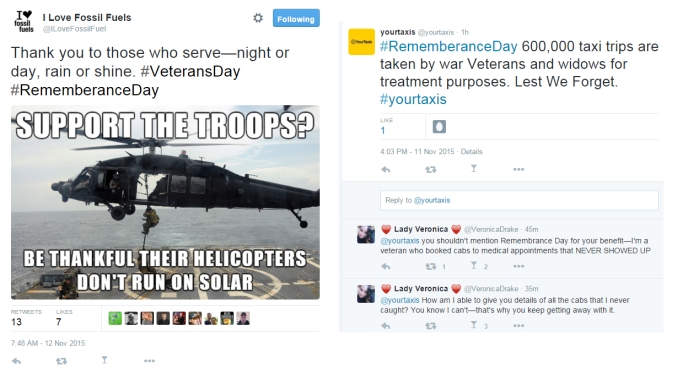