No, wind farms did not cause Adelaide's power outage

Last Sunday, there were widespread power outages in Adelaide, due to what seems to be a combination of planned maintenance on one of the two interconnectors between South Australia and Victoria and a collection of other outages. The link between the two states was partly severed, and 160 megawatts of flow from the interconnector vanished instantly. This causes a sudden change in frequency, and to balance this loss of power, some demand had to be shed, causing the outages.


You can see here the (blue line) IC drop out, and SA gas immediately ramps up to account for the loss pic.twitter.com/WJ0ZYWXSiE
— Ketan Joshi (@KetanJ0) November 1, 2015

As you might expect, this easy-to-understand series of events serves as a great little substrate for panicked assignations of blame, devoid of evidence or analysis - check out these two articles for some actual numbers around the issue.


Attributing this incident to the presence of renewable energy isn't supported by evidence. Single events like Sunday's outages don't suggest a prior or looming trend of frequent outages caused by renewables. Heard, at least, is willing to engage with this question on Twitter.

But Andrew Bolt, a blogger for News Corp, takes what might normally be a subtle, calculated effort to heap blame on any technology that doesn't burn compressed dead old plants to get power, runs with it, and fumbles in the process. It's like that brave seagull you always see at Circular Quay, that steals an enormous sandwich, thinking it's done something totally great, but then proceeds to drop it into the ocean. Then it just hovers, squawking with angry confusion at the foregone bounty, as the square of sodden oceanic food expands into nothingness.

Andrew Bolt's piece, here, is cleverly titled "Wind don’t blow, South Australia don’t glow". This is an attempt to distract you from the fact that power supply in SA continues uninterrupted during low wind periods, because you're dazzled by the revolutionary, inventive rhyme that's been deployed in the headline.

The 1st of November is a full 160 days from Bolt's chart. Weirdly, Bolt has picked a single day - specifically, one in which the change in output looks dramatic due to the scaling on the y-axis of his chart. Let's look at 25/05/2015 in context: 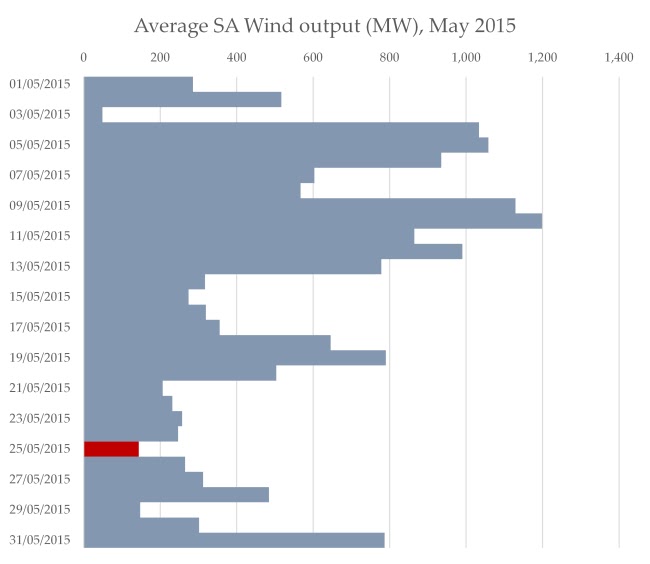 It's a little disappointing that he didn't choose the 3rd. Maybe he was trying to be generous? Or maybe the change in wind speed wasn't spooky enough? Anyway, it gets worse.

"South Australia’s Premier likes to boast his state has more wind power than any other.....what he doesn’t add is that this not only gives South Australia the country’s highest power prices and a dependency on Victoria’s coal-fired power"


This is the part where the seagull soars through the air, but begins to feel the sandwich falling from its beak. He  claims that SA's power price is the highest in the country, due solely to wind power - he uses the word "gives". Australian Energy Market Commission data shows pretty clearly how weird that claim is.

First, we can say with confidence that SA has relatively high power prices. The following shows FY15 costs: 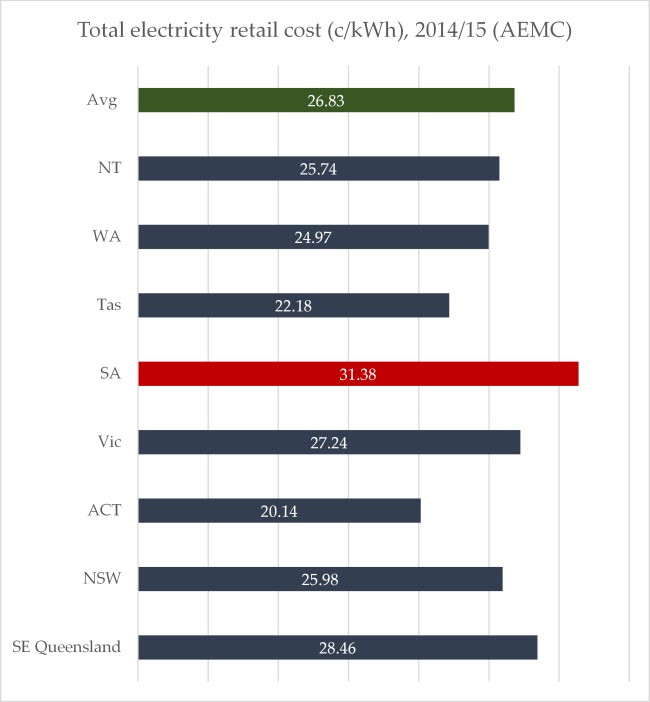 Hmm, okay. So SA has the highest cost, and the highest wind power penetration (about 30%). Since good ol' common sense tells us that if two things that happen at the same time, one thing has definitively caused the other, we could stop here.

But, well, sod it, let's look at the percentage contribution of the LRET, the scheme that supports wind development in Australia, for each state, for the same year: 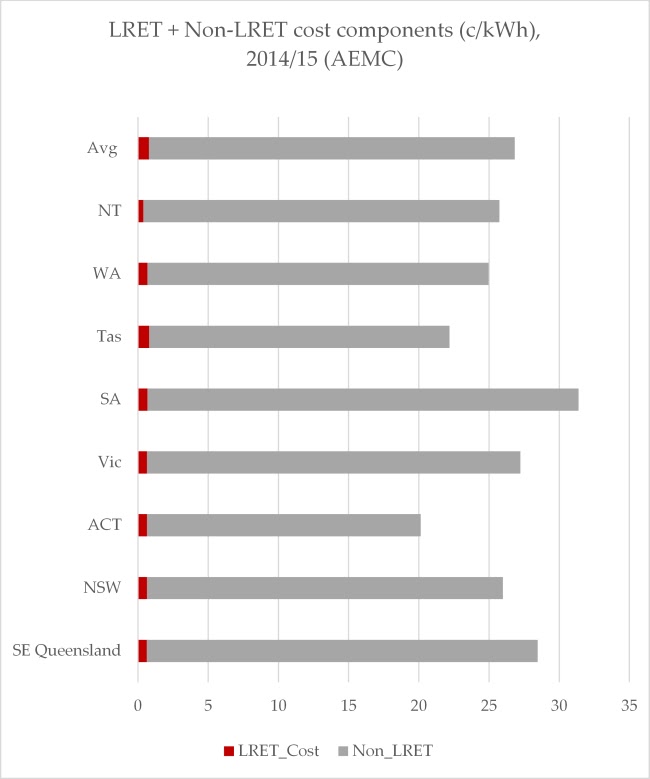 SA's high retail costs aren't caused by wind farms. SA's LRET cost, as a percentage of total bills, is the second lowest (it's 2.17%, only the NT has a lower percentage, at 1.48%).

Shucks. Turns out you can't establish a causal relationship because two things happen at the same time. This piece of knowledge is really going to shake up public discourse.

After providing some handy links to an anonymous anti-wind blog that regularly posts death threats and racist abuse, Bolt quotes from an article in the Adelaide Advertiser:

"A spokesman for SA Power Networks said the state lost supply from “upstream” when the interconnector shut down, triggering an automatic loss of power — load shedding — in SA, resulting widespread outages…When the Victorian system shut down, 160 megawatts of energy was lost and wind power did not supply energy because it often does not start until 3am."


Oh, boy. I don't even know where to start. The last sentence seems to have been added in by someone who literally just threw in a reckon into their article. Readers were entirely convinced by this too - many of the comments express a hatred of wind power as a consequence of this weird, invented claim. 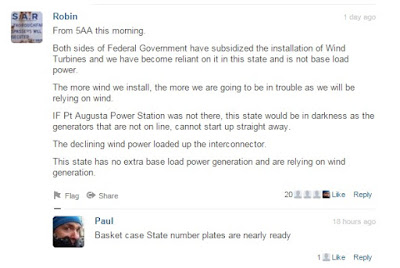 First, megawatts are power, and megawatt-hours are energy. So, the lines 'megawatts of energy' and 'power did not supply energy' aren't exactly filling me with hope that our reckoner understands the basics of the national electricity market.

So, did "wind power not supply energy" (it hurts, typing that)? Here's a chart of output by fuel type for the night of the 1st, on which the power outages occurred: 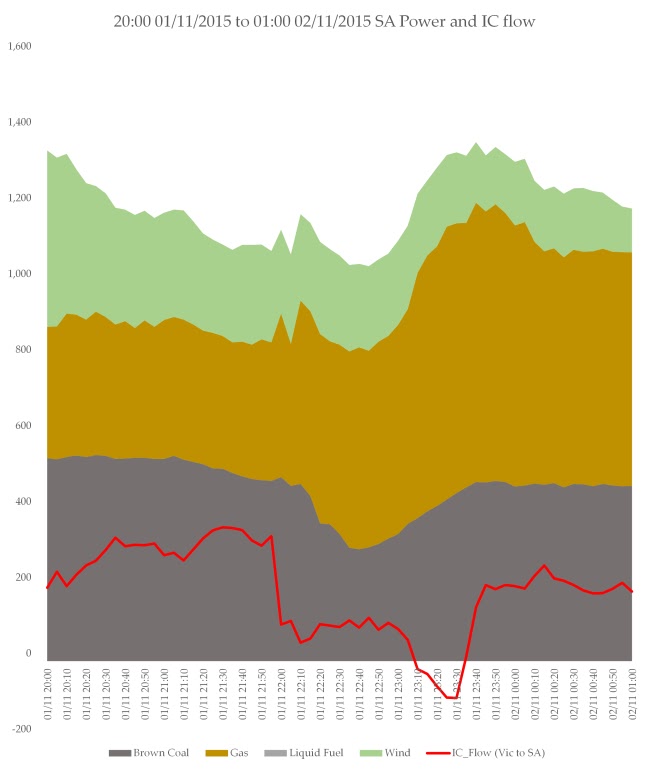 This is roughly the point at which our seagull is watching its coveted sandwich plummet towards the dark green surface of Sydney harbour.

What about "often does not start until 3am"? Are wind speeds over South Australia directly connected to Central Standard Time? Does Andrew Bolt really believe that the atmosphere refuses to move until a specified time, every day? Let's look at average wind power output in SA, by hour, so far this year: 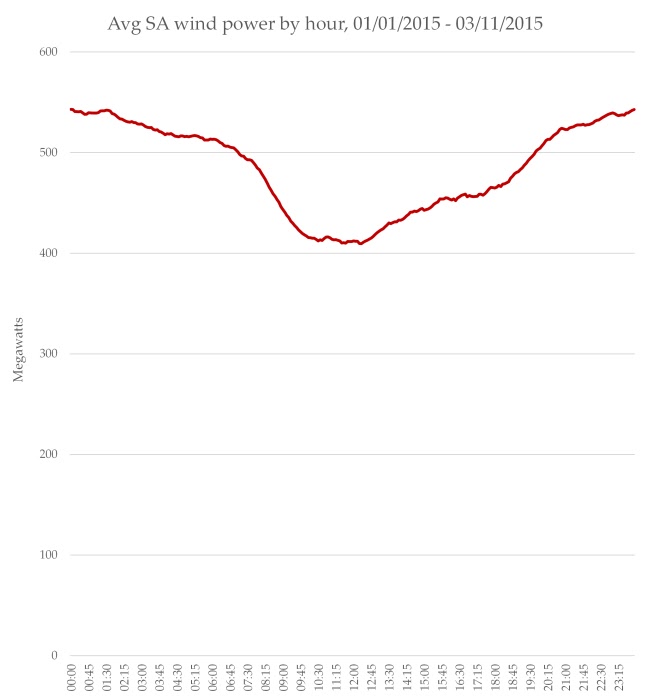 Obviously, averages don't tell the whole story, but this is more than enough to dismiss that weird, casual statement about diurnal variations in wind speed. In fact, that profile is neatly opposite to SA's solar power output, which is a good thing in the long run.

Yes, South Australian wind power was producing at the time of the blackout, and no, the atmosphere doesn't wake up at 3am. This is where our seagull friend simply hovers above the inedible, putrid sandwich, wondering what went wrong, squawking at nothing and no-one in particular.

Over the next few weeks, there will be quite a few attempts to induce fear and anxiety about South Australian renewable energy, using this event as a basis. They'll over-egg the risks presented by variable-output power, and they'll completely ignore the risks presented by a total reliance on outdated, carbon-intensive fuels and technologies. Some of these attempts will be more subtle than others. These claims are somewhere in the angry-seagull-that-lost-a-sandwich zone.