Why clean tech inspires a new magnitude of wrongness

Edit 01/02/2016 - I knew I'd stuff something up! Thanks commenters for pointing out I over-estimated fuel consumption - it's 22l per 100km (I thought 22/km seemed big..but I know little about truckin'). It's fixed below, and all reliant values updated - kind of enhances my point :)

Renewable energy, presented as environmentally friendly and clean, must turn out to be harmful to humans and the environment. There's an ironic, vindicating righteousness in believing, as intensely as you possibly can, that technology used to reduce environmental impact actually increases it.

This is what drives monumentally ludicrous runaway myths, like the now-infamous 'WIND FARMS CAUSE GLOBAL WARMING' - a particularly frenzied, unhinged example. It spread virally, despite desperate pleas from the scientist who did the original work.

Continuing this trend, any nugget of information that suggests fossil fuels are involved in the production, maintenance or operation of clean energy is decontextualised, mutated beyond recognition and spread with absolute glee within the anti-renewable, climate-skeptic social media landscape. It's this wonderful feeling of righteous irony they seek, and critics of clean technology and climate skeptics will manufacture amazing new magnitudes of wrongness just to grasp that emotion for a fleeting second.


"HUMAN STUPIDITY KNOWS NO LIMITS
The entire rationale for wind turbines is to stop global warming by reducing the amount of Co2 being returned to the atmosphere from the burning of fossil fuels.
In the attached picture, recently taken in Sweden, freezing cold weather has caused the rotor blades of a wind turbine to ice up bringing the blades to a complete stop.

To fix the "problem" a helicopter is employed (burning aviation fuel) to spray hot water (which is heated in the frigid temperatures using a truck equipped with a 260 kW oil burner) on the blades of the turbine to de-ice them.

The aviation fuel, the diesel for the truck, and the oil burned to heat the water, could produce more electricity (at the right time to meet demand) than the unfrozen wind turbine could ever produce. (Before it freezes up again).

The attached picture is a metaphor of the complete insanity of the climate change debate.
In decades to come this one photo alone with sum up an era of stupidity, when rational thought, logic and commonsense was abandoned and immense wealth and resources needlessly sacrificed." 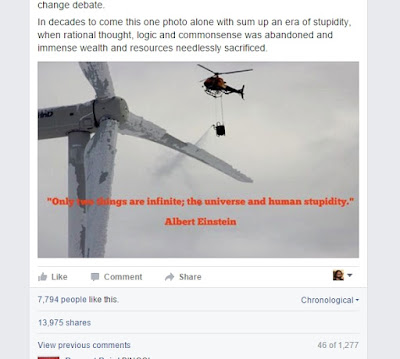 The lengthy post by Liberal MP Craig Kelly was quickly republished on a variety of climate skeptic blogs and social media accounts:


Saturday Silliness – wind turbine photo of the year https://t.co/0z17JruFdl pic.twitter.com/qkaLf3L31V
— Watts Up With That (@wattsupwiththat) January 23, 2016

Okay. So everyone is angry because a helicopter that uses fossil fuels was used to melt ice that had frozen wind turbine in Sweden.

It's not mentioned or link to in Kelly's original Facebook post, but the original seems to be a Swedish outlet called NyTeknik, an outlet that covers new technology and innovation. The article, translated into English roughly by Google, states that:

"Glaciated rotor blades are the scourge of wind turbine owners in cold climates. Alpine Helicopter in Constance has developed a new way to kick-start production when the ice forces the turbines stop: a helicopter that sprays hot water."


You can read the full calculations at the bottom of this post, but shown below is a comparison between the emissions from de-icing the wind turbine, and the emissions saved by two day's worth of power output: 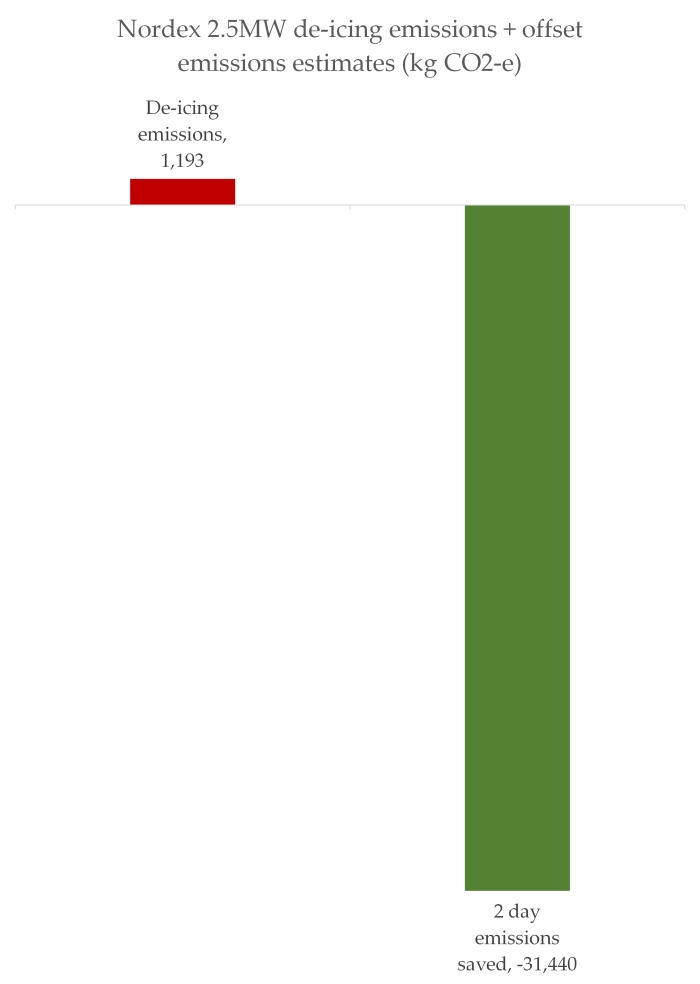 Of course, the whole argument itself, around de-icing using a helicopter, is already outdated. The wind farm in question has 30 new turbines on the way, each with a dual de-icing system installed in the blades - that information was in the article from which Kelly sourced his image, but left out of his post.

There's an interesting dichotomy here. Take a cursory glance at the 1,254 comments on Kelly's original post, and you'll see a common theme in all those who agree with his position: 'greenies', 'warmists' and 'leftards' are blind followers - dead-eyed, unquestioning sheep:

It takes 5-8 months to pay back the embedded energy in a wind turbine. Human activity emits 100 times more CO2 than all volcanoes on the planet (let alone just one). They're all very wrong, but they frame their wrongness as a disgusted reproach to a group they perceive as persistently wrong, and blind to reality.

Don't start feeling good about yourself. This is something that crops up on either side of the political spectrum (though I'd argue it's certainly more prevalent on the conservative side). You've probably seen this image:

Quite a few people sent it to me - it went viral. But Barton never said that. His point was certainly contentious and his hypothetical was pretty silly, but that's besides the point - the meme was inaccurate, and unfair. The post digging into its veracity was barely shared at all.

So, there are cognitive mechanics underpinning this phenomenon. We receive a morsel of information that confirms our beliefs, and we do two things:

- We share it, without checking to see whether it's true
- We label those who doubt its veracity as infected by some mass blindness, cuddling into a herd of conformity as we blast away their brainwashing with our dank truth bombs.

The frequency and magnitude of these earth-shaking screw-ups is an important marker, for me. It shows, with absolute clarity, that clean technology is currently an issue linked totally to political belief systems. The machines are co-opted into ancient political and cultural battles, and information that once bore some linkage to reality is battered and bent, to serve the purposes of maintaining these mindless, eternal squabbles.

This is why deploying technological upgrades to our energy system is so amazingly hard. This magnitude of wrongness is a shining marker of a machine dragged backwards by politics and ideology.

What were the emissions from the process?

The article states that:

"It takes us about 1.5 hours to process a sharp occurrence of icing wind turbines, says CEO Mats Widgren. Last winter, the method was tested with good results in Skellefteå Kraft's wind farm in the low mountain Uljabuouda in Arjeplog. During the year, the technology has been refined, and now it is ready for use. The water is heated over night using a truck equipped with a 260 kW oil burner. When morning dawns are 44 cubic meters of the 60-degree water in the tanks, and the helicopter can start running in the shuttle to the icy wind turbine"


Thankfully, a commenter, Bas Scheffers, has already estimated emissions for the operation of the helicopter:

"The AS350 helicopter depicted here burns about 200 litres an hour, producing up to 400 kg of CO2. When the blades are spinning again, a turbine of this size produces 500 kWh on average. To produce 500 kWh using coal would produce about 500 kg of CO2. So assuming it takes about an hour to de-ice, the payback in CO2 terms is less than an hours running time"


I really don't know a lot about helicopters, but comparing images of the AS350 to the image in the article, it's hard to argue. This site estimates ~35 gallons per hour of operation for an AS350 - slightly less than 200 litres, but let's go with Bas' upper estimate - 400kgCO2/hour, which is 600 kgCO2 for the total 1.5 hours of de-icing.

The truck heats 44 cubic metres of water* to 60°C overnight using a 260 kilowatt oil burner. If it's left at full output overnight, it's 260 kilowatts by ~10 hours, which is 2,600 kilowatt-hours of energy expended.


So, assuming our water starts off at 10°C, our formula is:

Non-freight carrying trucks consume approximately 22 litres of diesel fuel per 100 km (see edit note) - an overestimate but let's run with it. It's unlikely to be more than a few kilometres between the turbine and the site office where the truck would fill up with water - let's call it five, for a total of 1.1 litres of diesel.

The Australian National Greenhouse Gas reporting technical guidelines has the following emissions factors for fuel oil, in kgco2-e per GJ. We can apply this to all three, and get a rough approximation of the total emissions of the 1.5 hour de-icing operation:

What's the output, and displaced emissions, from the wind turbine?

This is relatively easy to calculate. The photo is taken at the Blaiken wind farm, in Sweden. Each of the Nordex turbines has a capacity of 2.5 megawatts, and average capacity for for onshore wind in Sweden is 32%. Again, let's be conservative, and assume that it's only operating at 20% capacity.


Our total emissions from the de-icing operation was 1,193.3 kilograms of co2-e. An Australian brown-coal power station has an emissions intensity of 1.3102 tonnes of co2 per megawatt hour (2015 average), or 1.31 kilograms per kilowatt hour.

So, 1,193.3 kilograms of co2 emissions would get you ~911 kilowatt hours of electrical energy.

If the wind was high enough for the turbine to be at maximum output, you'd only need 0.364 hours, or ~22 minutes.

Over the course of two days, the wind turbine will offset 2500 x 0.2 x 48 x 1.31 = 31,440 kilograms of co2 emissions. That's around 26 times the emissions output by the de-icing helicopter technique. We don't know how often the de-icing needs to occur, but it's likely it's deployed during times of high wind output, to maximise the return on the economic costs of de-icing.

*I'm not sure it's actually water. The translated article specifies water, but I'd expect them to be using ethylene glycol or some other type of anti-freeze - water would just....freeze again, right? In any case, ethylene glycol has a lower specific heat than water (2.2 compared to 4.1), and as such, would require significantly less energy to heat (4.4 GJ, or ~330 kgCO2-e), and therefore would result in a lower emissions output. Let's just go with water, because we're choosing conservative assumptions that are as kind to Kelly's position as possible...
Posted by Ketan at 12:33:00