The ABC's primary science journalism series, Catalyst, is due to air a program warning of the health risks of wireless networking, this Tuesday night, on the 16th of February.

I haven't seen it yet, obviously. But I have, in a way. I feel like I've been watching it for five straight years, on repeat, with tiny variations in content and wording. It's another tiny chapter in the perpetual, thematically consistent presentation of a safe new technology as something we ought to fear. But scientific research points to these stories as being a major contributor to the phenomenon they're examining, creating a self-sustaining loop of fear and anxiety. Asking questions is fine, but this style of asking questions is causing demonstrable harm.

Why it will hurt

A previous iteration of this perpetual program: in 2007, the BBC's Panorama, an investigative current affairs show, aired an episode about the health risks of WiFi. It relied heavily on an 'electrosmog' pressure group, and attacked experts. The episode spurred a barrage of complaints, which were upheld by the BBC's editorial complaints unit. Ben Goldacre, a UK science writer, wrote about it extensively, here.

More interestingly, that episode of Panorama was used in a scientific study examining the impact of misinformation on symptom reporting in people who claim to be hypersensitive to eletromagnetic radiation. The study was done by Witthoft and Rubin, in 2013.

Participants watched the Panorama WiFi episode, and a control film. They were then exposed to a 'sham' wifi signal - essentially, a placebo. People who watched the episode were significantly more likely to report symptoms from the fake wifi signal than those who hadn't: 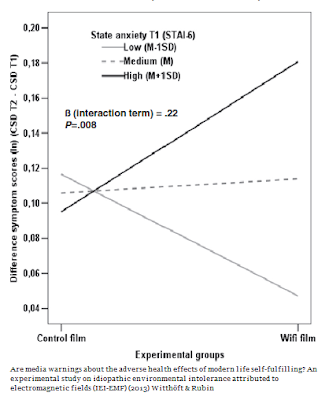 The presentation of information can hurt. This isn't controversial anymore. Electromagnetic fields are a particularly tempting contender for this perpetual warning of impending suffering. Another study, from 2010, found the same thing, as did this study. A study in 2013, by Eldridge-Thomas and Rubin, examined newspaper reports, and found that:


Shockingly, 72% of the content they examined blamed electromagnetic fields, despite there being no evidence to suggest these are the physical cause of the phenomenon they describe, and plenty of evidence demonstrating that people report symptoms regardless of the presence of EMFs.

Suggestions and expectations of forecasted sickness can cause real sickness. People who suffer from anxiety and depression are at greater risk. This is a real thing that can be measured and published, and it's being maintained by this perpetual story: this new thing might hurt you.

This is the format I predict the show will take:

- One or two 'experts', and one or two 'sufferers', all claim the technology is causing sickness. These people will be on-screen for the majority of the segment.

- A brief statement of what the majority of scientists think, maybe at the end, and only briefly.

- End with a reassertion of uncertainty: 'time will tell, but for now, be cautious'.

Catalyst's promotional segments for the story already suggest this format:


The promo features an interview with Dr Devra Davis, who's an outspoken critic of electromagnetic fields, and is currently on a tour around Australia, presenting the health risks of wireless devices: 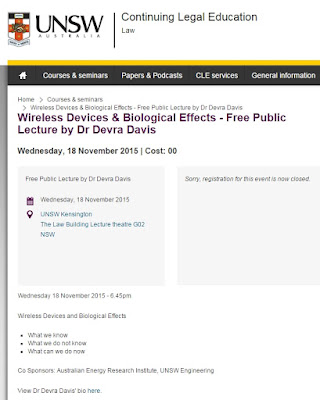 A scientist from the Cancer Council, Professor Bernard Stewart, said “I am deeply disturbed by this (Dr Davis’ claims) because I do not think there is any medical or scientific research that justifies the anxiety of the community that is being raised. Clearly, Dr Davis is in the business of raising concern”. 'Patchd', a new device that claims to protect you from the terror of electromagnetism, was sending invites on behalf of Dr Davis (the tweet was since deleted). The company is now promoting the upcoming episode: 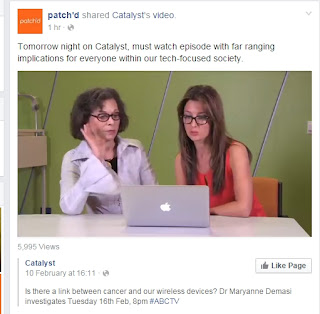 It's going to be interesting to see whether Catalyst explores the links between this new company selling its wares, and any affiliations their interviewees might have. Not to say that there are any, but it's well worth asking the question.

There are a few things that I suspect Catalyst will almost certainly include, that serve as the vital ingredients for creating fear and anxiety, including the simulation of scientific uncertainty. These are 'fright factors', as explored in this paper:

"A diagnostic checklist of fright factors has helped to explain why some environmental health risks are more likely to trigger alarm, anxiety or outrage than others, independently of scientific estimates of their seriousness (Bennett 1999). Media stories that contain a large number of these fright factors provoke a strong public reaction (Bennett 2010). These fright factors have been shown in newspaper coverage of human papillomavirus (HPV) vaccination, avian flu, biosolids and genetically modified crops (Burke 2004, Goodman and Goodman 2006, Abdelmutti and Hoffman-Goetz 2009, Fung et al. 2011)"

The research paper applied the above factors to media coverage of wind turbines in Canada - a technology that's an precise analogue of the same perpetual fear-based story: you should be scared of this new thing, because scientists are uncertain and some people feel sick.

In fact, comments posted on Catalyst's Facebook page already anticipate the episode will confirm and reinforce the fears held by people who claim sensitivity to electromagnetism: 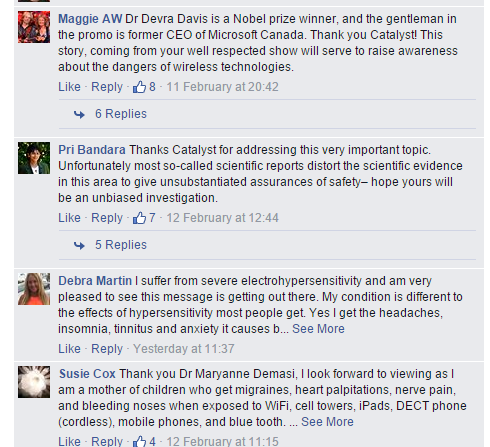 Some of these themes already dominate the preview (include the classic image of a device radiating evil green waves), but I suspect the full episode will adhere more closely to the checklist of 'fright factors' than to the current scientific consensus on the safety of wireless technology.


There's a chance I'm wrong, but I'd posit it's not a big chance. They might take the opportunity to fully explore the serious implications of expectations of harm, and psychological factors, with the preview cleverly baiting viewers expecting a scare-story on WiFi. Perhaps the warnings of harm are accurate, or even understated - WiFi might be reaching aggressively into our skulls and frying our neurons. In which case one would expect the purveyors of these warnings to be publishing research, and talking to the scientific community, rather than talking to the media and selling books. Perception is flawed. If we want to be sure, we place our theories in the imperfect but demonstrably useful crucible of the scientific method.

I'm not optimistic - the story is a perpetual one, updated to serve whatever anxieties dominate current discourse. At the moment, it's nervousness about the prevalence of smartphones in public spaces. Someone needs to jam a thick, jagged stick into the spokes of this wheel, because it causes real suffering, and it needs to end. Here's hoping Tuesday's episode doesn't add to the perpetual state of fear around new technology.
Posted by Ketan at 13:43:00