Self-Sabotage in the world of climate, energy and politics

It's a bit of everything for me. But it's weird how regularly writers self-sabotage, when it's clear they're setting out to change minds.

A recent piece published on New Matilda is a great example of this. It's fair to assume the intent of the piece is to present nuclear power as a viable solution to the threat of climate change. But it's written in a way that immediately alienates anyone that it might be on the verge of considering that technology as something they could support.

It's worth examining more closely, because this sort of thing happens in the renewable energy world, and the fossil fuel world, and the nuclear power world, and well, all the worlds. We're amazingly adept at convincing the convinced, and alienating the curious.

The author of piece, Geoff Russell, doesn't really synthesise a strong argument. He bases his piece on an odd coffee shop analogy:

"The renewable alternative is like running a coffee shop with a crew of footloose narcoleptics who arrive if and when they feel like it and who can nod off with little notice. Would this work? Of course; just hire enough of them"


Right from the outset, Russell frames renewable energy as a neurological disorder (because those suffering from narcolepsy can't be productive members of society, right?), and nuclear power as healthy and productive. The article also features some odd claims tacked onto this poorly-considered and condescending analogy:

“But what happens when it’s really windy? The output is then triple the demand; so, without storage, that electricity gets dumped.”


Wind generators are classified as ‘semi-scheduled’ on the NEM, which means they are issued with a dispatch target of X megawatts, in the 5-minute intervals where output limits are warranted. This target is used to balance supply and demand. When there’s too much supply, wind generators are forced to turn down, and face consequences (non-compliance) if they don’t. Electricity doesn’t get ‘dumped’.

Someone brought this up in the comments, to no avail:

All generators on the National Electricity Market inform the operator of their ramp rate, and fluctuations are managed according to how rapidly each generator can respond. Each wind farm is different, but I've had a fair amount of experience with market dispatch SCADA control systems for a large South Australian wind farm, and it's fair to say it's significantly more response than a coal-fired power station. The system is carefully balanced, with responsiveness weighed against the frequency and severity of forecasted and unplanned fluctuations in the grid.

Russell also tries to assert that a fleet of wind turbines would frequently be at a country-wide state of low output:


Every time this is mentioned, the author tends to fail to mention forecasting tools - market operators know well in advance when these periods occur. They're also not as frequent as Russell insinuates. The chart below (I made it for this) shows how the distribution of wind output has changed over time: 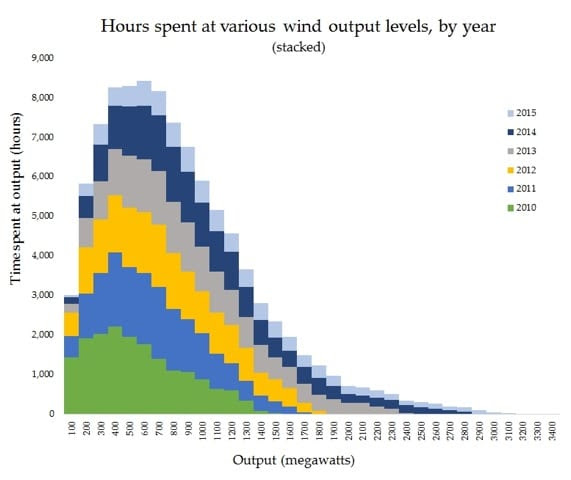 Yes, wind turbines are built with a capacity far higher than the average level of wind it’s going to receive. This is because it captures wind power at a range of different wind speeds – regardless of regularity. High winds are rare, but it's still important to capture that energy.

It’s the same idea behind a car slowing down and speeding up – it can travel at 250km/h, but on average it goes at 50km/h. Except, we don’t criticise vehicle technology because it operates at a low capacity factor – because it’s doing precisely what it’s designed to do, as wind turbines are. If you use the same metric to judge two different technologies, you'll get a misleading answer.

Russell also looks at the required build of transmission network infrastructure for new clean energy, too:

"These lines aren’t being built without protest. The path of least resistance will be wildlife habitat; to avoid concerns both real and imagined over reducing property prices and health risks."

"At the edge of an easement, the [Electro-magnetic fields] are appreciably lower than they are in the centre. The WHO limits are not exceeded anywhere within easements; the EMFs outside easements are consequently well below these limits"


Of course, contact with power lines is lethal - hence the safety regulations. But Russell rails angrily against those who consider nuclear power a general health risk, and public concern has focused largely on electro-magnetic fields. When it comes to critiquing renewable energy, Russell seems happy to adopt a standpoint that he'd normally dismiss as irrational and emotional.

These articles are always framed as arguments against a system comprised of 100% renewable energy. This is an enjoyable exercise for those who really don't like renewable energy, or the groups that tend to support it. Russell labels the technology 'unreliable', 'narcoleptic', 'deficient' - there is palpable loathing, here.

A claimed immunity to bias and tribalism is a pretty constant theme in nuclear power advocacy, too. The benefits of this attitude are pretty clear: it means you've got access to a truth that lesser, more biasy people don't have. This is an alienating attitude. There's a section on the 'Decarbonise SA' website, run by Ben Heard, entitled 'WHO GETS IT?' - the immediate implication being that all names not on that list are somehow disconnected from reality. Senator Sean Edwards, a key player in nuclear advocacy in Australia, frames the issue in a similar way:


As I mentioned earlier, this dual system of claiming immunity to delusion whilst simultaneously protecting one's own worldview isn't unique to nuclear power advocacy.

In the world of renewable energy advocacy, we sometimes fail to understand and acknowledge the technical limitations of clean energy. It's something I find myself doing pretty regularly; it's a problem, and it's difficult to notice and quell.

Australia's coal industry is probably the largest and purest example of this problem - their entire PR campaign rests on this effortless system of self-sabotage. Consider, too, Naomi Klein's efforts to frame climate change action as belonging solely to a subset of political change. Mark Lynas writes:

"In insisting that tackling carbon emissions must be subordinated into a wider agenda of social revolution and the dismantling of corporate capitalism, Klein isn’t making climate mitigation easier: she is making it politically toxic"


Lynas outlines what would be almost unremarkably obvious, were we not all the primary drivers of this trend: we protect our perception first, and we care about saving humanity second. It isn't bad, or weird: our brains come standard with this feature, and it's hard to avoid it.

Advocates and critics of renewable energy, fossil fuels and nuclear power are each subject to an alternate mix of cultural and social blinders, each to a varying severity. Layered on top is an assumed in-group bias immunity, and an assumed out-group bias-affliction.

Russell's article showcases this stark disconnect, but don't let that make you feel comfortable. We all tend towards self-sabotage, and it requires effort and practice to neuter.
Posted by Ketan at 13:57:00