My presentation for the 2015 Clean Energy Summit is below, including some words. There was some media coverage, too, which is nice.

I’d like to start with a quick anecdote I heard this morning. The Codrington Gardens B&B is Codrington’s #1 accommodation, and it’s about 2.1 kilometres away from the nearest turbine at Pacific Hydro’s Codrington wind farm.

A friend on Twitter told me about a story retold by the owner, about an irate guest who, in the morning after a stay at the B&B, issued a complaint about wind farm noise keeping him up overnight. In the morning, after breakfast, the owner went outside with the guest, who pointed out the noise. The owner responded by pointing out that specific noise was actually the sound of the ocean. Without missing a beat, the guest responded by saying ‘Well, if I’d known that, I would have been able to sleep” 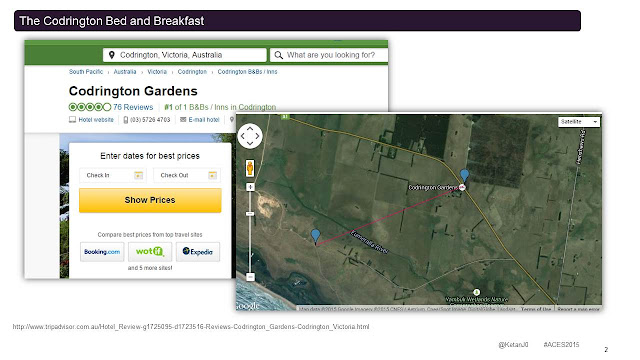 Our reactions to the presence of wind farms is a little surprising, at times. When you tunnel into the history of our reactions to a variety of technological changes, it’s clear that the pattern we’ve seen so far with wind farms is precisely what you’d expect to materialise, considering the way we executed the development of these big, new clean energy machines.

I’d like to make a case for a developmental philosophy that pre-empts this pattern of response. One that assumes human reactions to technology are a certainty, not an anomaly. We’ve been stuck for so long in a world of discourse where ludicrousness has no ceiling. The claimed impacts of wind farms escalate into increasing absurdity, as you would have seen in First Dog’s talk. But when you listen with both ears to our detractors, as was suggested last night, we find there are answers and solutions that move past the endless scratching at the corners of scientific evidence, and into areas where both communities and clean tech providers reap enormous benefits.

Let’s dig into the tunnel of technological fear, and look some examples of human reactions to new machines that we live next to

Right now, we’re exposed a range of ultra high frequency and super high frequency wireless networks. There is a considerable range of individuals and groups across the world who consider this exposure to be a major risk to human health. The arguments are pretty consistent among these groups and individuals. ‘The science just isn’t in yet, we need to take a precautionary approach, and I feel sick near wifi routers’. Professor Ian Lowe at the Griffith School of Natural Sciences points out that

“Belief in electromagnetic hypersensitivity is the natural outcome of rational human behaviour. The human brain always looks for cause and effect relationships. If you get a headache while sitting near a router, you may attribute the headache to that router. Confirmation bias will see that belief grow over time, until the belief becomes so strong that it actually manifests a headache. But it's the fear of the router that's the problem, rather than the router itself” 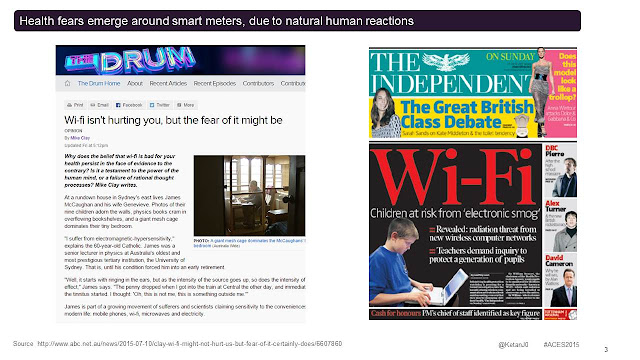 When you test people who claim to be sensitive to wifi in a lab, they’re generally unable to detect the presence of WiFi signals when the experimenter switches the signal on and off. What we learn from this is that you don’t need a politically motivated fear campaign to see the emergence of health fears around technology. Wireless networking isn’t impacting the profits of political donors, no think tanks are pushing out reports against wifi, and conservative columnists don’t obsess over it. This is something that happens because we’re human. It’s inaccurate to say people who experience this are deluded, or irrational, or uneducated. This is how the electrified meat between our ears is geared to respond to technological change.

A similar phenomenon emerged around the mandatory rollout of smart meters in Victoria. There are now several examples of people claiming symptomatic experiences that are identical to the claims that exist around wireless networking. But in the case of smart meters, a political party was formed - called “People power victoria no smart meters”. 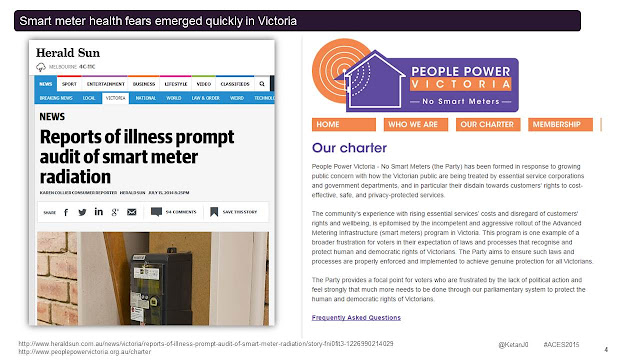 Part of their charter included pushing for the right for people to “to reject any object or technology being installed on or near their premises if they have reasonable concerns about its possible effect on their health, privacy or wellbeing”. They didn’t win any seats in the 2014 state election, but they won 1,375 first preference votes.

The backlash against Victorian smart meters, predicated on the theory that they’re likely to hurt human beings, is a clear example of the role of control in how we perceive risk. Research shows that the less control we have over a change in our environment, the more likely we are to overestimate the risk of a technology and see a bizarre, ludicrous mix of claims. The rollout of smart meters in New South Wales will be optional - my bet is that we will see a near-zero emergence of health fears in New South Wales. 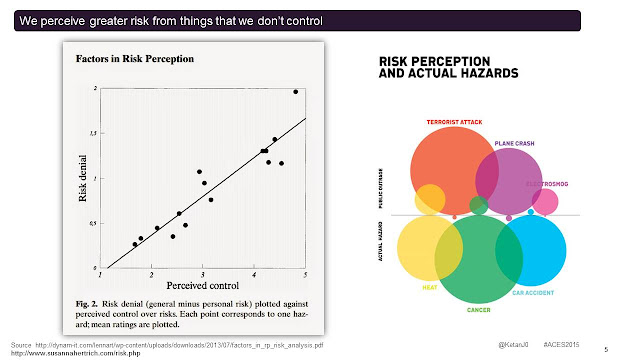 Compare, on this slide, the purple bubble for plane crashes, and the light blue bubble for car accidents. If we got to hold the wheel when flying in a plane, would our perception of risk be more closely aligned to the actual danger? Conversely, will self-driving cars lead to a significantly higher perception of risk, alongside big improvements in safety? 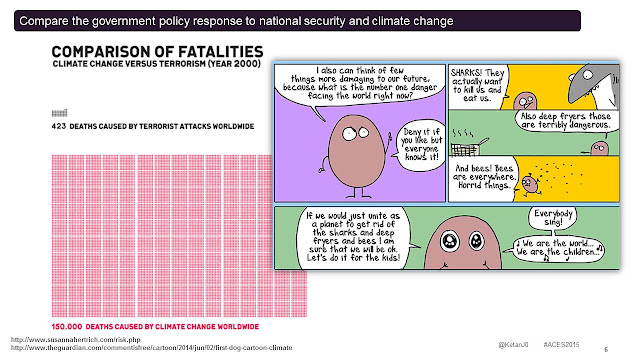 On a side note, it’s worth comparing our collective perception of the risk of climate change versus the risk of terrorism, compared to the likelihood that either of these things are going to kill or injure us. Think about which risk has dominated media coverage and government priorities over the past year, and think about how wind farms might sit on this chart.

In 2009, a couple living near a planned wind farm in New York coined the term ‘wind turbine syndrome’, and paired the phrase with a self-published book detailing a self-selected sample of phone interviews, with no control group. 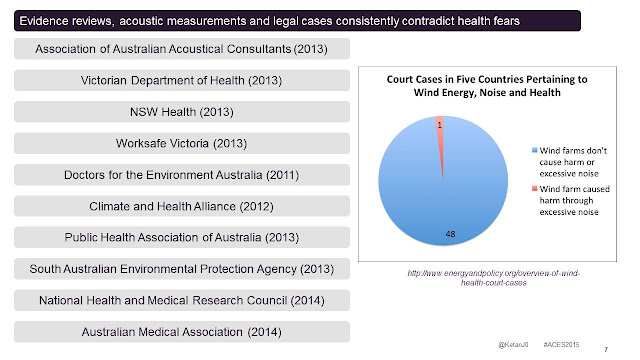 Since then, the phenomenon has been adopted by political and local wind farm opponents, but roundly rejected by a cluster of scientific reviews, acoustic studies, provocation tests, health authority reviews, legal cases and some preliminary large-scale epidemiological studies.

A cursory examination of ‘wind turbine syndrome’ tells us that we’re seeing the same phenomenon we’ve seen with wifi and smart meters. The actual symptoms are nearly identical, including many instances where complaints are issued despite nearby wind turbines being inoperative. 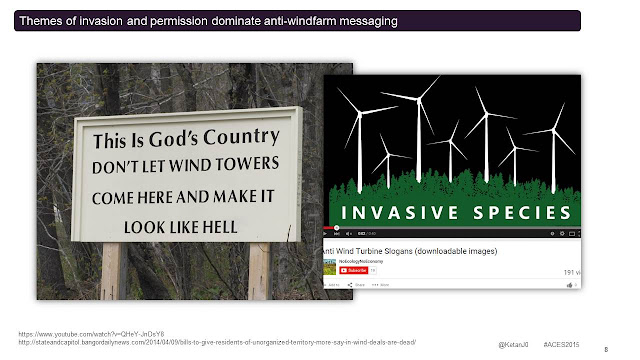 So the answer should be simple, right? Give people control, let them have influence over the project and the over-perception of risk should abate. This is the nexus of why the development of clean energy needs to incorporate community engagement and ownership schemes - people react badly when they’re left out of major changes to the environment. This needs to change.

It seems that some of this logic was at play when Pacific Hydro, one of Australia’s leaders in wind farm community engagement, let residents near the Cape Bridgewater wind farm nominate their own acoustician, to compare noise emissions from the wind farm to their own symptomatic experiences. I followed the release of this report, and subsequent media coverage, very closely. 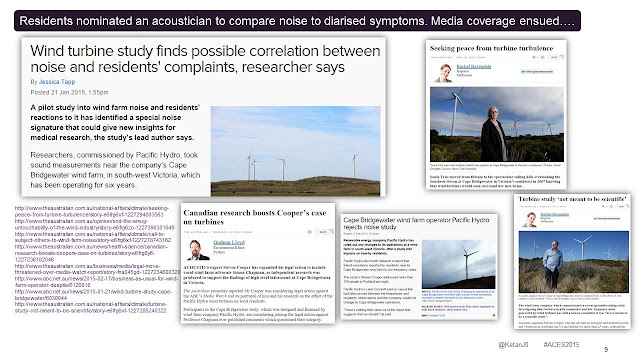 The report’s conclusions, based on a sample of six residents already opposed to the project, void of any tests of statistical significance and not published in a blinded peer review scientific journal of any kind, was euphemistically labelled a ‘pilot study’, rather than a bad study, by the recent senate wind farm inquiry, and was explicitly used to justify the creation of a wind farm commissioner and new scientific bodies examining wind turbine syndrome, in addition to several months of media coverage in a range of local and national media outlets.

Why did efforts to restore control, in good faith, back to the community result in a bad outcome for the community, for the industry and for the scientific discourse? It’s because the myth of wind turbine syndrome survives through bad science - studies claim to detect the presence of a malicious disease, but are so ridden with confounders and bias that they could be detecting anything at all. We’re going to be in this position many times in the future, as we feel our way forward, but we can’t stop discovering and testing and exploring, because the future of the industry depends entirely on whether the technologies are accepted by communities. Anti-wind activism does impact investment, and has a real financial impact on the wind industry. 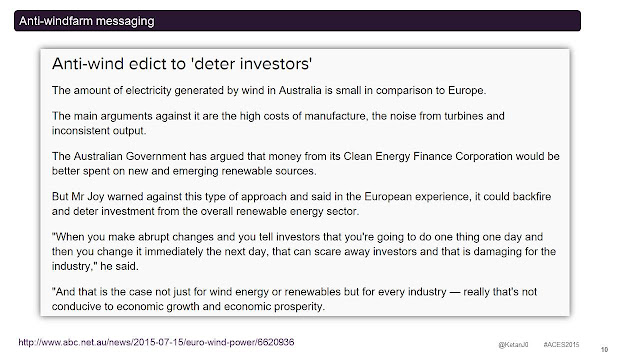 The people whose live next to economy-sustaining technology need to be deeply involved from the outset. Already, wind farm land owners speak up when the leader of the country expresses his desire to destroy an Australian technology due solely to his internal aesthetic machinations. Imagine entire communities rising to defend clean energy projects, when they come under attack from proponents of decades old machines running on dinosaur juice. We’ve already seen this phenomenon at work with solar citizens, who are very skilled at empowering household solar owners to speak up in defense of their technology. Benefit sharing schemes can be tuned and tweaked to suit communities. The financial benefits for clean energy companies will be realised through increased investor confidence in projects that don’t incur lengthy planning cases.

We’ve been living too long in a world where there is no upper limit to absurd, nonscientific medical diagnoses propagated by anti-windfarm groups and small pockets in the media. If open the doors to communities and let them become participants in this crazy world of decarbonisation, then we’ll find ourselves able to fend off the daily onslaught of attacks on wind farm investment.
Posted by Ketan at 18:13:00