For most of this year, The Australian has been publishing a near-weekly update on why people living near wind turbines ought to fear for their lives, and why they should seek scientific medical information from their environment editor, rather than from the medical community.

After opposition leader Bill Shorten announced his intention to propose an ambition for 50% renewable energy in our electricity generation mix by 2030, The Australian shifted from 'wind turbine syndrome' to new format of panic.

In today's paper, there were twelve articles, a cartoon, and a front page plastered with a headline that is literally the repetition of a primary-school-grade slur used by Abbott (who admitted the phrase was 'unparliamentary', but was defended by Speaker Bronwyn Bishop). 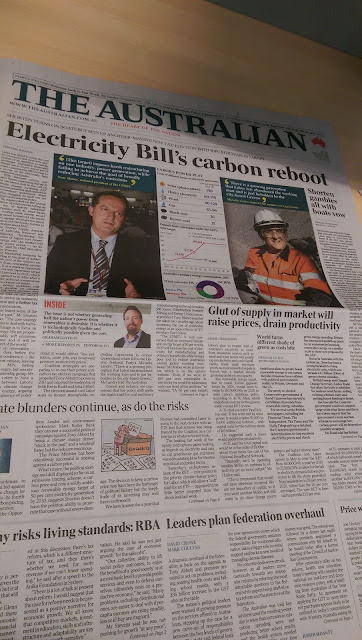 Here's a list of articles in The Australian today, with a word count and quote from each (if I missed any, let me know):


Renewable energy: Flings of desire do not soar over truth - Graham Lloyd - 427 words

Carbon blunders continue, as do the risks - Dennis Shanahan - 503 words

So, that's a total of 6,573 words dedicated to building the argument that a renewable energy target of 50% is terrible.

Standing awkwardly in a bustling crowd of panic, fury and keywords like 'jobs' and 'billions' was a single admission of the actual price impact of a 50% by 2030 scenario, buried in Adam Creighton's article:

"Labor’s policy would increase an average household’s electricity prices by $4 a year in today’s dollars between 2023 to 2030, according to modelling by Frontier Economics."

Creighton's begrudging admission is mentioned in passing on page 6 of the paper. The issue here is the impost of updating our energy system on retail electricity prices, as subtly delineated by The Australian's nuanced front-page headline. So....what's this modelling that Creighton refers to?

Apparently, the modelling is by Frontier Economics. Their RET review modelling doesn't mention a 50% RE scenario. They mention a 50% renewable energy scenario in passing, in a study that models European energy:

"Our quantitative analysis shows that it is possible for single countries to pursue their own development objectives without unduly burdening energy consumers. For example, our analysis of the German market in a scenario where renewables reach a 50% share of gross power consumption by 2050 confirms that any additional costs will remain manageable"


The Minerals Council, Australia's chief industry group representing coal and gas, are perturbed by the suggestion, and warn, as they did with the current RET and with carbon pricing, that everything we love will be eviscerated, if we adopt new technologies for generating energy:

"It is not yet clear that the Opposition is proposing an increase in the mandatory target to 50 per cent. If it does, the subsidies to renewables will double or even triple by 2030, at extraordinary cost to energy consumers"


They're very carefully avoiding explaining exactly how much the 'cost' will be - instead using terms like 'extraordinary'. Analysis by Hugh Saddler in The Conversation estimates a small impact:

"If implementation of a 50% renewable electricity target is accompanied by policies like [consumption reduction initiatives], households could find themselves paying no more for electricity each year after 2030 than they are paying today"

Tristan Edis, an analyst at Business Spectator, guesses around $6 per bill. He also compares his estimates to the impact of a 15% GST on electricity prices:

The reason these estimates differ so greatly with regards to the household impost of a 50% by 2030 renewable energy target is because we really just don't know what mix of policy mechanisms are going to be used to meet that goal (assuming it's agreed to at the Labor party's national conference on the weekend).

It may not take the form of an adjustment to our current Renewable Energy Target scheme. Whatever form it takes, it's understandably difficult to model something that doesn't exist yet.

Soon, we'll have another round of warring models. As we've seen today, media outlets opposed to new energy technology will use tactics like vague, non-specific warnings and declarations of total cost (rather than cost per household), in the hope of producing big, scary-sounding numbers.

But here's the thing - filling the void that will exist between now and when this ambition is fleshed out with the furious tornado of fear offered in today's Australian isn't actually going to work. Abbott has tried already - repeating endlessly, to this day, that renewable energy causes 'significant price pressure'. He came to believe it himself - the Prime Minister's office commissioned a RET review led by a climate skeptic. Even then, it found the RET scheme lowers electricity bills in the long run.

The arguments in today's edition of The Australian are weak and watery, and I don't doubt many of the authors felt a profound wave of awkwardness writing them. The opponents of renewable energy have thrown their cards on the table. But they've played this hand before, and they walked out embarrassed. Chances are, it's going to happen again.
Posted by Ketan at 16:46:00