Some people have a big platform, and they use it to criticise renewable energy. Opinion writers, shock jocks, journalists, senators - they've all got full-time access to a huge number of ears and eyes, and they use that to full advantage.

The thing is, when they say things they claim to be true things supported by numbers and evidence, they're often just.......not. I think it's weird, and interesting.


On rare occasions, those who loudly proclaim the children of their imagination as facts are questioned. During a debate on climate change, radio host Alan Jones nearly implodes with sheer outrage after he's asked if a paper he's brought up has been published in a peer-reviewed journal, below:

Last Monday, Alan Jones claimed on the ABC's Q and A panel show that:

"Eighty per cent of Australian energy comes from coal, coal-fired power, and it’s about $79 a kilowatt hour,” he said. “Wind power is about $1502 a kilowatt hour"


Mike Seccombe wrote a good explanation of precisely how wrong this in The Saturday Paper, as did Dylan Mcconnell in The Conversation, in which Jones admits to the error. To summarise, in a simple chart: 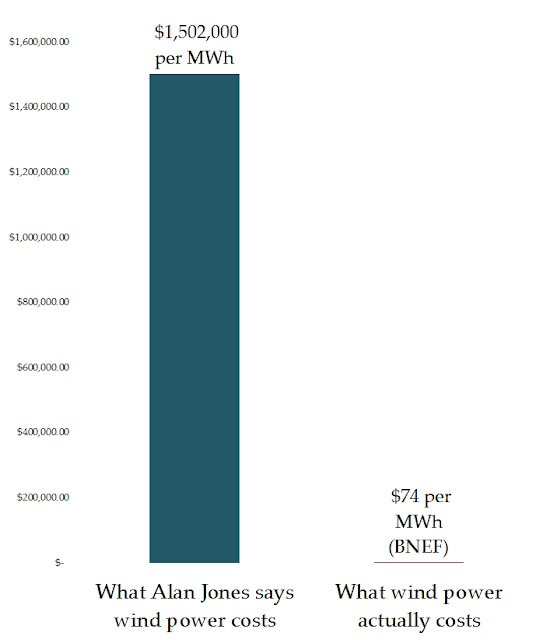 
McCrann, a News Corp columnist, is growing more unique, as his level-headed colleagues quietly step back from angry dismissal of climate science. At some point, he'll be screaming his unintentionally comical diatribes at shoppers in Pitt St mall, but for now, he writes in The Australian:

"For the dirty little secret which nah-nah-nah denying Climate Change true believers refuse to face is that all renewable capacity has to be backed by continuing power stations which actually work: carbon-based coal or gas, or nuclear. Because when the wind don’t blow, and the sun don’t shine, the power don’t flow. Even across the vast span of southern Australia there are hours on end when we get not a single megawatt out of “all” those wind turbines"


He's usually more wrong than this, as I've written here before. Some remnant spark of self-awareness was forcing him to be not too specific about exactly which time periods he means. Even then, we can actually check his claim that there are 'hours on end' when the total output of South Australian wind farms is at zero. Let's first compare the total number of hours, in the past 1.5 years, where SA wind has been greater than zero, and compare it to the total number of hours it's been at zero: 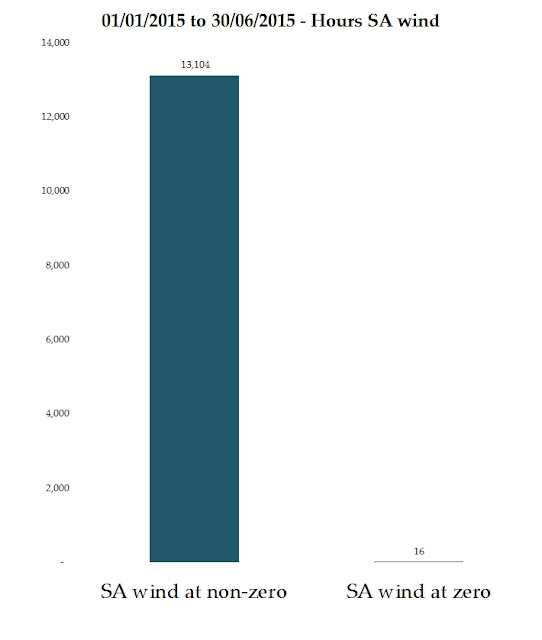 Oh dear. In the past 1.5 years, about 0.12% of the time has been comprised of a total wind output of zero in South Australia, or about sixteen hours out of thirteen thousand, one hundred and four. Sure, some of those hours were 'on end' - the longest stretch of zero output was 2.5 hours in April 2014 - but these incidents are absurdly rare, and McCrann seems to genuinely hold the belief they're representative of normal operation.


Lloyd's featured a lot on this blog, because much of his coverage of renewable energy sways towards misunderstandings, cherry-picking and factual errors. His piece from the weekend has several, but one caught my eye:

"In addition to guaranteed above-markets rates, intermittency helps explain why the addition of large scale renewables can lead to higher prices for electricity consumers.

“When you study the states of Australia that have had dramatic increases in their household power bills in recent years you will find a direct correlation to the number of wind turbines that have been connected to the grid in those states,” independent senator John Maddigan told the Senate last month. “You will find the same correlation in European countries.


There's rather a lot to break down, even in this small section of Lloyd's article. The whole thing has an incredibly high concentration of misunderstanding and outright falsehoods - it would take weeks to debunk it. Simply, is there a 'direct correlation' between number of turbines, and high power bills?

I honestly don't really have any theories. There seems to be an ever-present assumption that if we publicly declare something to be factual - as in, a thing that has been checked thoroughly and is likely to be true - that we won't be asked to support that claim with references or sources. I might just be over-attributing this to renewable energy, because it's my thing.

Sometimes, fact-checkers and wonks (like me, and Media Watch, and The Conversation and ABC Fact Check) tend to dive in and explain the wrongness. These media outlets have a decent platform, so I think they're doing good work. But I wonder if we should be encouraging a more wide-ranging shift in attitude: it's not okay to vomit out some numerical feelings-garbage, without expecting that you're going to be pulled up on it immediately.

Regardless, this is something that really happens quite a lot. For added fun, it's worth casually asking people to justify their claims. Really, it's great. I highly recommend it. Patrick Moore, who features in the video up top, is filmed here during the making of a documentary, being asked to stand behind something he's said. It's...fun. Watch it.